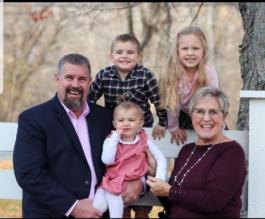 The day my wife Heather found out she had lung cancer was the day that everything changed. In that moment, our plans for the future disappeared. Our focus for the present became just lung cancer.

While Heather dealt with the disease, I dealt with the details. I was the gateway of the data. I kept copies of all her test results and scans. I learned as much as I could about lung cancer. I asked her doctors questions. Science was always an interest of mine, so it was a natural fit that we fell into these roles.

Thankfully, more than 9 years after she was diagnosed, Heather is still doing well. She had several surgeries, chemotherapy, and radiation, but has remained stable since.

It was difficult to watch her go through treatment, particularly chemotherapy. This was 2013, so prior to most targeted therapies and immunotherapy; they were on the horizon, but not really happening yet. While they had drugs to help with nausea and she didn’t lose most of her hair, she struggled with hydrating and white blood cell count. You feel helpless, watching someone you love struggle with something you have no control over.

Radiation also wasn’t great, particularly back then. Heather still deals with side effects. She now has radiation-induced fibrosis. When you look at a CT scan, you can see the line the radiation took and damaged her lung tissue.

When Heather was diagnosed, we had a good support network. We had each other, but we also had our kids, our friends, and our colleagues.

Heather was also able to be matched with two patients for peer support through a Canadian cancer organization. They did not have this sort of support for caregivers, though. At the time, caregivers weren’t really considered co-survivors like we are now, and it was less clear the impact cancer had on the entire family. This has changed, and I am now involved with an organization that has monthly caregiving meetups, which are very helpful.

I also volunteer as a mentor for LUNGevity LifeLine program, where I speak one-on-one with other caregivers. I listen. I give a little advice based on my own experiences. I always caveat anything I share with the fact that no situation is exactly the same. It’s an honor to be partnered with someone who needs help. I enjoy giving back and sharing my knowledge.

We are also part of several Facebook groups and other lung cancer and cancer organizations in Canada. It can be rewarding, but challenging to be part of an online community like this. You have a unique and very challenging thing in common and that is not a bond that breaks easily. However, people unfortunately pass away, and it can be incredibly difficult to process. You see yourself in these moments.

Despite this, a support network – whether one-on-one or a group – is so important when you are going through this journey. The connections you make with people in these situations is unlike any other relationship and there will be times you need their knowledge, support, and community.

Heather and I are also involved in advocacy, though Heather has more time than I do for it. We fight to stop the stigma around lung cancer and let people know if you have lungs, you can get lung cancer. We  advocate for more screening to catch lung cancer in its earliest stages. Our goal is for low dose CT scans to become the standard of care and as routine as a colonoscopy in your 50s. It’s exciting to be involved in these efforts and to feel like we can help others.

I have always been pretty positive for the future, even after Heather was initially diagnosed. Even though I am optimistic, lung cancer is always there. I don’t think about it every day, but it’s in the back of my head. Recurrence is always a possibility, and I don’t want to see her sick again.

Despite my fears, I have faith that things will continue to work out. I am encouraged by the advances that are being made and the new treatment options available. Statistically, people are living longer. There are more support options. This gives me hope.

Cancer is a scary word. It leads to some pretty traumatic times. But it also shines a light on all the good things you have in your relationships and your family. Caregiving can be very rewarding, as long as you remember to take care of yourself too.

Are you looking to connect with other lung cancer caregivers? Join our private Facebook Group. 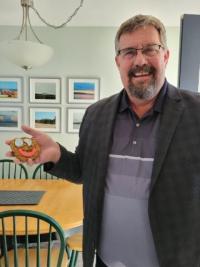 Bill Hogan is a retired educator after 35 years in the profession. Currently, he is an elected member of the Legislative Assembly in New Brunswick, Canada. He also is the government caucus chair.

Bill has been a caregiver for his wife Heather since she was diagnosed with NSCLC in 2012. He is an advocate for his wife as well as for the lung cancer community, which in the early days was mainly through LUNGevity and now in Canada at a the local provincial and national levels.

His current volunteerism is primarily in the area of caregiver support through the Lifeline Partner program with LUNGevity and with Lung Health in Canada.

In his spare time he enjoys his spending time with his grandchildren.

Blog category
From the community
-> Caregiving