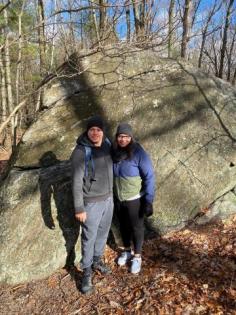 In the spring of 2021, Myra’s husband Kelvin had COVID-19. After, he had a lingering cough and shortness of breath. His chest hurt a bit when he breathed. They assumed it was pneumonia or at least COVID-related. They never guessed it would be lung cancer.

Myra’s sister is a nurse, and she urged them to get an x-ray. They went to urgent care. After reviewing the scan, the doctor told them, “I can’t let you go home. You need to go to the emergency department and get a CAT scan right now. I can’t tell what this is. I can only tell you what I see.”

What she saw? A mass in Kelvin’s lungs.

“My heart was pounding,” described Myra upon learning of Kelvin’s cancer. “I felt a lot of emotions. I didn’t really grasp what it was. When you hear cancer, you wonder how much time you have and what you can do to make it longer.”

It was very scary and emotional time, but Kelvin was so positive. He said, “Doctor, give me the best medicine you’ve got!” Kelvin’s positivity helped Myra realize she wanted to be there for him. She invested more time and research into understanding lung cancer. She wanted to be able to advocate for him, but she couldn’t do that until she knew how to handle it.

While researching and learning more about the disease, she stumbled upon some valuable resources, like LUNGevity and other patient groups. These communities were essential to helping her cope with the diagnosis and better understand the disease.

Now, Myra attends LUNGevity’s monthly Caregiver Meetup and regularly connects with people from patient groups for Kelvin’s specific type of lung cancer to get support and more information. These communities have been invaluable to their journey with lung cancer.

“The doctor told us he couldn’t recommend treatment until they had more information,” Myra explains. “They had done a bunch of tests and we were waiting for the results. We kept calling and bringing it up at appointments, and he kept telling us to wait.”

While waiting, Kelvin was almost started on immunotherapy. Their doctor was on vacation and another doctor was covering. There was a miscommunication when Kelvin went in for his appointment, and they started prepping him for an infusion. Luckily, he mentioned it to Myra before they started, and she knew that wasn’t right, so they were able to stop it before he received treatment.

Shortly after, they found out about Kelvin’s ALK mutation and today he takes a daily pill to treat his cancer. Kelvin’s treatment causes fatigue, but overall, he lives a normal life: doing work around the house and yard and keeping busy.

When Kelvin was first diagnosed, their doctor asked if they wanted to get a second opinion. Initially, they said no; they wanted to see how his recommendation panned out first.

Now that they’ve learned more about lung cancer, they will absolutely seek a second opinion if a change needs to be made to Kelvin’s treatment. They already know where they’d go: Mass General in Boston to see an ALK specialist. They just want to see an expert in Kelvin’s type of lung cancer to make sure their treatment plan is the best one.

“If we had known ALK specialists existed from the very beginning, we might have gone to see one for a second opinion,” Myra says. “Luckily, I do feel like we’re getting the best treatment we can and we’re on the right track. If things change, I know where to go."

Myra and Kelvin did not tell their family right away. They waited until they had more information about Kelvin’s diagnosis.

When they were ready, they sat down the entire family, including their kids and Kelvin’s mom, who was visiting from Puerto Rico, and told them together.

“It was a relief for them to finally know,” Myra says. “We didn’t give them too much information upfront, just the basics. We told them if anything changed, we’d inform them, but not to worry until then. We told them we’d support each other and take it day by day.”

Life as a caregiver

“Caregiving is an important job,” says Myra. “Even though it’s hard, your person needs you. It’s essential to be present and patient.”

Myra also tries to embrace the time she and Kelvin can spend together. “I focus on being grateful for what we have. I enjoy just sitting next to Kelvin, enjoying our small moments and just hearing each other breathe. I will hold on to these moments forever.”

Cancer brought Myra and Kelvin closer together. They don’t take things for granted anymore. They try to do small favors for each other to show they care. For example, Kelvin packs Myra’s lunch and Myra makes Kelvin’s breakfast so he has something to eat with his meds.

“We believe this was our destiny,” Myra explained. “This was always going to be part of our journey in life. It might not make sense and we might not want it, but I am here because my husband needed me by his side to face this. Kelvin knows he can count on me.”

Myra is still new to caregiving - Kelvin was diagnosed in June 2021. Things are still raw for their family. But the advice that she was given that help her the most was: You can think about what’s going to happen tomorrow. You can only be present today.

There are a lot of things to feel hopeful for, but Myra feels particularly hopeful knowing there are people out there working to make things better for people in Kelvin’s position. Scientists are determined to extend and increase quality of life, and Myra thinks Kelvin can benefit from these efforts.

She also feels hopeful knowing she is not alone. “There are other caregivers and other people with lung cancer,” Myra says. “Everyone is connected. We have our ups and downs, but we all continue to fight and support each other. We can share stories and advice. And this gives me hope.”

Are you looking to connect with other lung cancer caregivers? Join our private Facebook Group.

Blog category
From the community
-> Caregiving

I just found out I have…

I just found out I have stage 4. Never smoked a day in my life

Lynn it is shocking to learn…

Lynn it is shocking to learn how many people have lung cancer and never smoked. Like you, My husband is one of them. Lungevity has invaluable resources. I wish you all the best.

Thanks for sharing your…

Thanks for sharing your story Myra!