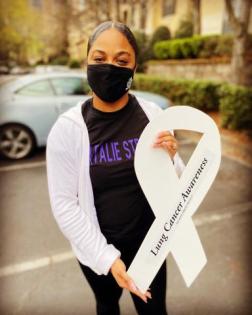 I had some mild symptoms before my diagnosis, but they could all be explained away. Beginning in December 2019, I had a light cough and experienced abnormal fatigue, but I have asthma and worked out a lot and I assumed it was all related.

The cough and fatigue didn’t get any better, so my primary care doctor sent me to a pulmonologist. She performed an x-ray and breathing tests, and I just knew that she was going to say that everything was fine. When she walked into the room her exact words were: “WHOA! Something is in one of your lungs, and I have no idea what it is.”

The pulmonologist wanted to biopsy the area, and I thought it would be a very simple process. However, a week or so after the procedure, I started having complications from the biopsy. I had to go to the emergency room for a collapsed lung (pneumothorax). The thoracic surgeon performed surgery to repair my lungs and, while operating, took another biopsy sample. He then discovered the cancer in both of my lungs. I really hoped that he was wrong, however, a few days later the oncologist confirmed that it was definitely cancer.

Before I started treatment, my husband and I had to make some tough decisions. We haven’t had children and were faced with the possibility of my eggs being damaged due to the treatment, and any pregnancy would have to be terminated. We had to decide if we wanted to freeze my eggs before treatment started, which would delay the treatment, or possibly not be able to have kids at all. We decided to move forward with the treatment immediately.

I started a combination of chemotherapy and immunotherapy in August. The first few months of treatment, I felt awful; I was so fatigued and there was very little that I could do. It would take me over a week to recover from the treatments each time.

After those first few months I was taken off the stronger chemo, and things got better. I felt physically stronger. I also started to understand the disease better. When I was first diagnosed, I couldn’t retain much of what my doctor was telling me. For example, I knew from the beginning that I didn’t have mutations, but I didn’t know what that meant. As time went on, I learned more about my disease, which made it easier to handle. This, paired with more energy and feeling physically better, made it easier to live life more normally.

I am still coming to terms with my diagnosis. How I feel changes day by day, more so the mental aspect than the physical. When my oncologist first told me I had lung cancer, I thought I was immediately going to die; I think that’s what most people think when they hear stage IV, no matter the prognosis. I don’t think that anymore, though. I am hopeful that I might be NED (no evidence of disease) someday.

Support is essential to how I’ve made it this far. Support from my husband, family, friends, coworkers and other survivors. I appreciate all of the support that I have received so far from everyone; it really means a lot. I’ve learned that all support is not good support, though; it’s important to find what works for you.

I initially tried local support groups, but found them to be unhelpful and negative. I realized it was important for me to find people closer in age to myself who had a similar experience as I was having. Through LUNGevity’s LifeLine, I was partnered with a mentor who is also a lung cancer survivor in her 30s. While our situations are different, it’s so helpful to talk to someone else who is going through what I am.

I found Facebook groups for people with lung cancer; they are so positive and hopeful. I started reaching out to people in the groups and began sharing experiences with them. If you are looking for a connection like this, it can be as simple as messaging someone, “Hey, I saw you have lung cancer, would you like to talk?” Every single person I reached out to responded to me.

At first, I had trouble telling people my cancer was stage IV. When people hear “stage IV,” they think death, and I don’t want people to see me as at the end of the line. Some people also took the news worse than I did. They would start crying and I would have to comfort them rather than vice versa. I actually had anxiety about having to tell people because I had no idea how they would react.

My last scan in December 2020 showed an almost 50% reduction in one lung, and I am currently doing well.  It’s still difficult, but I feel more positive and determined than when I was first diagnosed. Even after I cry, I remind myself I need to get it together and keep it moving.

While I may have been hesitant to tell people it was stage IV, I’ve never shied away from telling people I have lung cancer. It’s important to me that they know it’s lung cancer so they can understand that anyone can get the disease. I have never been a smoker and it frustrates me when people ask if I’ve smoked, but my husband helped me to understand that I can use this opportunity to educate people about lung cancer and the statistics.

Initially, prior to my situation, I thought “cancer survivor,” meant you beat it. Now that I have cancer, I look at it totally differently: I am a survivor. I am surviving every day with this stage IV disease. I am living my life as normal as possible. It’s hard, but it’s worth it. 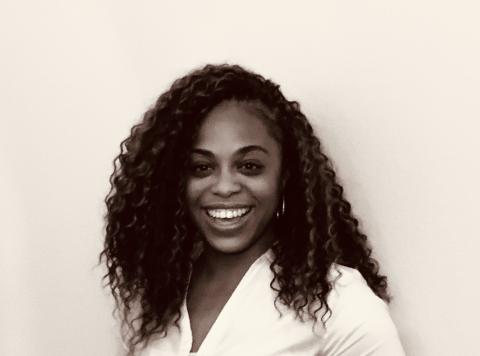 Natalie Brown is in software sales and enjoys providing happiness to her clients. She was diagnosed with stage IV lung cancer during the pandemic, which made things a lot more challenging. She is focused on raising awareness and educating others about lung cancer. Natalie enjoys working out, playing with her puppy, spending time with her family and friends and traveling.

Congratulations. I always felt that there was something very extraordinarily special about you I always kept you in mind and in prayer. Your testimony is worth sharing and keep the FAITH.Love you and Torrance . auntie Lillian

Amazing story thank you for

Amazing story thank you for sharing. You definitely have a positive presence and attitude. Keep enjoying life you are definitely not done shining.

Thank you for sharing your

Thank you for sharing your testimony! You are definitely a survivor and a Shero for me. To see you smile and stay positive always make my day! Yes and thank you for reminding me that everyday is a day to celebrate! ❤️

You are so incredibly strong,

You are so incredibly strong, powerful, and beautiful my friend. I’m so proud of the warrior you are.

I am so unbelievably proud of

I am so unbelievably proud of you! The Lord HAS GOT YOU and you are beyond inspiring. thank you for letting this change you for the better and being so optimistic. we love you natalie!!!!

Thanks so much for sharing

Thanks so much for sharing your story Natalie. You’re one of the strongest people that I know!!! I look forward to you continuing to educate us on lung cancer. Continue to remain positive, keep that beautiful smile, and always keep the FAITH! As always you’re forever in my prayers, as I tell you all the time By The Blood of Jesus you’re already healed. Love you girl! -Always, Alveda Melton!

Amazing story... You got this

Amazing story... You got this Nat!

Beautiful story. One thing that was left out is that with all that she is going through, Natalie still reached out to colleagues regularly to check on their well-being. I am sure that love was not lost on her friends and family. She is a warrior with a HUGE heart. We are praying for a full recovery.