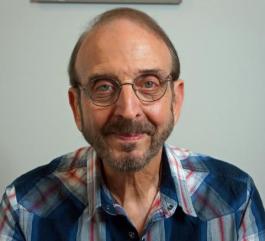 I used to think support groups were for weak people. Then, I found LUNGevity and Lung Cancer Support Community – boy, did that change my mind.

I discovered LUNGevity’s message board, Lung Cancer Support Community (LCSC), right after they found a rapidly growing nodule in my right lung. At the time, I had just retired early to be a full-time caregiver for my wife, who was in advanced stages of dementia, and I already felt mentally strained.

When I found out about the nodule, the news sent me to a dark place. Both my parents and many of my aunts and uncles on my mother’s side had died of cancer, so I was prepared for the graveyard. My immediate thought was not about fighting the cancer, but about figuring out who would take care of my wife when I was gone.

I did a little online research, which – frankly – either makes you more confused or more afraid, and stumbled upon LUNGevity. At first, I smirked at the name. Nice play on words, I thought, but there’s nothing long about living with lung cancer. I quickly glanced at a few posts but didn’t stay long.

A few nights later, I was laying bed, unable to sleep with no one to talk to. I went back to LCSC and really started reading the posts in the forum. I couldn’t stop. I read about other people’s journeys with lung cancer. I saw those who had been living with the disease for a while, helping those newly diagnosed. It was amazing to hear these stories and see how supportive these people were of each other.

The more I read, the more it felt like I knew these people who were posting – Curt, LexieCat, Bridget O and Eric. All of these people were going through what I was, but they were talking like they’ve “got this.” I couldn’t help but think, what am I missing?

I waited awhile before I joined in the conversation. It was a few months after they found the nodule and my doctor told me that there was only a 10% chance it would be benign with the rate that it was growing. What I heard was there was a 90% chance they’d remove my lung. Even though my doctor clarified they’d just remove a single lobe of my right lung, only about 15% of my lung capacity, I was still terrified. I truly believed that before the year was out, I would be dead.

This is when I made my first post. I explained my story and how I was feeling. It turned out others in the group were going through the exact same thing I was. They too were scared after their diagnosis and somehow that reduced my own fear. They were also incredibly knowledgeable. They led me through the full diagnostic process. They gave me questions to ask my medical team. They helped me better understand what my doctor was telling me.

I started to think maybe this wouldn’t be the end. Speaking with these people, hearing their stories, made my thoughts change from “I’m as good as dead” to “How can I increase my workout by 25% to help myself recover more quickly after surgery?” These people brought me back to reality that I could live after lung cancer.

I had a lobectomy later that spring. Because of the group, I knew what to expect during the procedure. I knew what a chest tube would feel like. I knew I needed to buy a wedge pillow in order to sleep at night. I knew how to get myself going in rehab.

Luckily, the surgery was a success, and I have been NED (no evidence of disease) since. I still have annual scans, but thankfully they have remained clear. Even though I’m NED, I stay connected to LCSC, and recently became a moderator on the message boards.

This community is my tribe. Even though I haven’t met them in person, they feel like family. There’s an old expression, “You can’t pick your family.” Which I suppose is true of blood relatives, but not true here. And unlike my real family, there is no one I wouldn’t want to eat Thanksgiving dinner with in this community.

If someone is having a hard time or trying a new treatment, I am on the edge of my seat waiting to hear updates. When I hear someone is doing well, it feels amazing. There are people in this community that have gone through hell, but they’re alive and they’re living a good life. That gives me an incredible amount of hope.

If you are newly diagnosed, the biggest piece of advice I could give you is to find your tribe. Get a group of people around you that can support you and take care of you. You may have a great family and friend support network, but you also need your lung cancer support group, people who have been through what you’re going through and can prepare you for what to expect and how to navigate this new journey you’re on.

Being a part of LCSC changed my life. When I was diagnosed, I was sure that was the end, but this group not only taught me how to live with lung cancer but made me want to live. 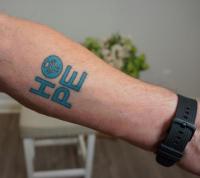 I always told my kids that they shouldn’t mess up their body with tattoos. But last year, I ignored my own advice and got a HOPE tattoo based on LUNGevity’s HOPE Summit logo. This word has become central to my life and I wanted it to be part of me as well.

I don’t know if I’ll live one year, 5 years, maybe 10 years, but between now and then, I will do all I can to help others. My life has become less about surviving and more about leaving a mark. I just want to know I’ve done the best I could to help people. As corny as it sounds, that’s it. That’s my hope.

Lou Torres is a retired executive and former musician who discovered he had stage 1 lung cancer in 2019 through an incidental CT scan for another issue.  Shortly after his diagnosis, Lou connected with the LUNGevity site and the Lung Cancer Support Community.  He felt that sharing his story and learnings could be helpful to others and so a year after joining, Lou became one of the Moderators for the forums.  Lou spends time overseeing his wife’s care, being of service to various groups as well as composing and recording music.  He lives with his two Wheaten Terriers, which keep him busy.

Blog category
From the community
-> Survivorship
->Survivor stories
-> Get involved

Lou. Thanks for sharing…

Lou.
Thanks for sharing your story and how you went from “ nope to hope”. I can relate to your story all to well. Yes, I feel like family with the people I’ve met through Lungevity like you. Thank you for your inspiring words!