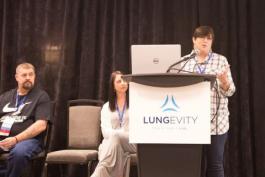 My daughter Jillian was first diagnosed with lung cancer when she was 28 years old. She thought it was just a swollen lymph node – a residual from a cold. Her lung cancer diagnosis came while we were sitting in a drab exam room, hoping that she had thyroid cancer. It ended up being stage IV non-small cell lung cancer.

At the time of her diagnosis, she had been out of the house for 10 years. She was financially secure with a stable career. She didn’t have a curfew, she didn’t have to answer to anyone, and she could come and go as she pleased. Suddenly, this changed overnight with her diagnosis.

Becoming a caregiver for your adult child is a hard pill to swallow. What do you say? How do you say it? Are you being intrusive? Are you giving them enough space? Are you taking away their independence? Treating them like a baby? Making all the decisions for them?

When she moved back in with us, we still wanted her to feel independent. It was important to try to keep her in charge. She kept the schedule and told us where she needed to be and when (even though I was at all her appointments, keeping my own calendar, and taking notes). Before an appointment, I would ask her if it was okay if I asked the doctor questions. We tried our best to make her feel autonomous, and she did her best to let us think she was falling for it.

Throughout all her treatment, she kept paying of her bills: rent, utilities, car payments, and insurance. We just couldn’t give up the hope that one day she would need to drive her car again. One of the hardest conversations we had was when I had to talk to her about getting her personal affairs in order. It was heart-wrenching to take her the family lawyer and help her get a will.

Jill wanted to do anything and everything that she could to live. Even at the end, she wanted to live. Whatever it took, she was willing to do. If doctors said, stand on your head, she would’ve found a way to stand on her head. Jillian was always hopeful, and I was too. Something we were going to do might not fix it, but it would carry her to the next best thing to come along.

Jillian being diagnosed with lung cancer floored people, including her team of doctors at the cancer center. They just didn’t normally see someone with such an advanced disease at 28.  Jillian was treated with radiation, chemo, and cyber knife on the lesions in her brain. This was in 2012, so she was only tested for the major gene mutations at the time (ALK, EGFR, and KRAS), but tested negative. While she eventually tested positive for ROS1, there were no drugs approved at the time and, by the time she they found the mutation, her liver was too damaged to qualify to go on a targeted therapy.

The chemo did shrink her tumors, but eventually, she became so sick that she couldn’t continue on any kind of treatment. Choosing to enter hospice was a difficult decision for her because she wasn’t giving up. The hospice coordinator explained that she could continue with medicine and treatments up until she said no. They would support her with whatever decision and the only reason they would stop her care is if she was told there was a cure and she qualified or if she didn’t want to continue with hospice.

She passed away in May 2013, less than a year after being diagnosed. After she passed, about a month went by, and life started going back to normal. It was almost like she wasn’t gone, just back home in Miami. My husband went back to work and our other kids went home. And I was stuck at home. I was angry, hurt, and frustrated. I needed something to do. I wanted to change people’s perception about lung cancer.

People always ask me: did she smoke? At first, that question made me furious. It took me a long time to come to terms with the fact that responding angrily was not helping. Instead, I now say, “I’m glad you asked that question. It has nothing to do with smoking. She was a never smoker, but that doesn’t matter; she shouldn’t be judged on how or why she got the disease. She was diagnosed with a terminal disease and it is a tragedy that it took her too soon.”

You didn’t see 28-year-olds on billboards with lung cancer. Stories were the same: “I got lung cancer because I smoked.” I needed desperately to get on a soap box and use a megaphone to say “ANYONE CAN GET THIS DISEASE.” With her passing, I found that my passion was in helping to raise awareness about lung cancer for other people.

Through my advocacy, I found a voice and determination in me that I didn’t know I had. I got more confident in speaking out and sharing my story. I didn’t want to be the person that lost her child and couldn’t do anything about it. I wanted to be the person who walked in the room, and they knew I had done an awful lot because my daughter gave her the faith and determination that she could make a difference.

For someone interested in getting involved in advocacy, you don’t have to be expert; all you need is passion. You just need to want to make a difference. Remember, you are not a number; you are a person who has something valuable to say. If you don’t know where to start, check-out advocacy organizations; most have tips and tools to get you started. You don’t have to look too hard to find a path to get involved. Even if it’s as small as writing letter, you can make a difference.

While it will never change our circumstances, what we knew, and when we knew it, lung cancer advocacy helps something good come out of something bad.  That’s why, years later, I’m still involved in lung cancer community.

There is so much more that can be done. She died 7 years ago. But in 7 years, 17 new drugs have come out. And we’re just on the cusp. People are thinking in novel ways about how to approach lung cancer. I find it inspiring, hopeful, encouraging, and motivating. If that’s what we could do with the little amount of money we have, what could we do with more money for more research? How much faster would that move discoveries and thoughts to treatment options and treatments? It boggles the mind.

Interested in learning more about lung cancer advocacy? We have the tools to help you get started.  Join the LUNGevity Action Network to take real steps towards improving lives and outcomes for people with lung cancer. 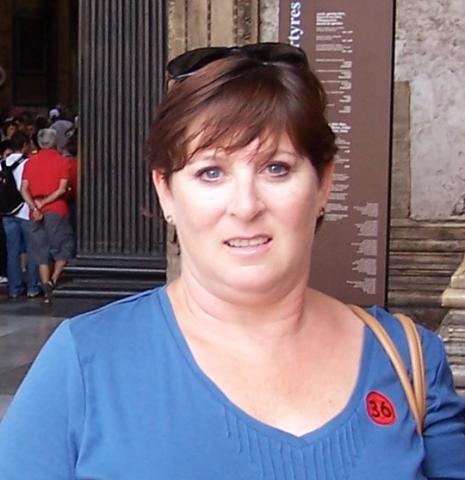 Ros Miller is wife, mother, advocate. Ros is a military spouse(retired), and gained many skills while exploring different jobs from cook to Girl Scout Cookie mom, substitute teacher, volunteer coordinator, administrative assistant and various nonprofit board positions. Today, Ros is a staunch advocate for lung cancer to help educate, raise awareness, fundraise for lung cancer research as Founder of Jillian's Dream and Executive Director of Prelude to a Cure.

Blog category
From the community
-> Caregiving
-> Diagnosed under 50
-> Get involved