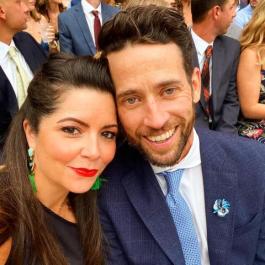 “Couples who have cancer together, stay together,” says Kristina Burke, a breast cancer survivor who is also primary caregiver to her husband Jim, who has stage IV EGFR lung cancer. “It’s hard to be in a family where two people have cancer. But we’re in it together and that’s what gets us through.”

Kristina had two surgeries and was finishing up radiation for her breast cancer when Jim started showing a few minor symptoms. "Jim and I have been together almost 23 years, and I had only seen him sick once or twice,” explains Kristina. “He never had the flu, never suffered from allergies, rarely had a cold. He doesn’t wear glasses and still has a head full of hair. He’s just our super man.”

Yet Jim developed a wheeze. This was early in the pandemic, so at first, the doctors asked if he was experiencing other symptoms of COVID-19, like fever and loss of smell. But Jim did not have any other symptoms, so his doctor attributed it to “adult onset asthma.”

“I’ve had asthma and allergies since I was a teen, and I wasn’t aware of adult onset asthma,” Kristina says. “On top of that, they prescribed him an inhaler without even listening to his chest. This was alarming for me.  I told Jim he had to tell his doctors that they needed to listen to him and/or he needs an x-ray because he also looks like he lost a significant amount of weight.”

This triggered the doctors to get an x-ray. After the x-ray, they asked him to stay for a CT scan. At this point, they knew something was wrong. 30 minutes after Jim got home, they got a phone that confirmed the worst: lung cancer.

Jim and Kristina were in the exact same spot around the same time of day as when Kristina found out about her breast cancer. The news hit hard. The next day, they learned the cancer had spread to his spine. Later, they would learn it was in his brains and bones as well.

At first, Kristina and Jim didn’t want to tell their two children. They have always been open and very close, and cancer did not change this. However, they wanted to get more information before they shared the news of yet another parent with cancer.

Once they were ready to tell them, they were very honest with them about what was happening and what they knew. Kristina’s advice for others struggling with how to tell kids? “Give it to them in chunks. Pause to let them ask questions. Don’t overwhelm them with too much medical terminology. Tell them what is going to change for them. It’s scary news, and you need to reassure them that you will still be there for them.”

Kristina and Jim also let their children be part of the process. Before a new doctor’s appointment, they’d ask: “Do you have any questions? Do you need any more information about anything?” This helped the kids immensely.

After Jim was diagnosed, their next step was biomarker testing. Kristina says, “Please talk to your doctor about biomarker testing. It is absolutely necessary to determine which treatment is best for you.” Because of biomarker testing, Jim learned he had a type of non-small cell lung cancer called EGFR deletion 19, which can be treated with a daily pill. When they found out, Kristina and Jim were hopeful, they never knew a first line treatment for advanced cancer could be a once a day pill!

This pill is what inspired the Burke’s successful fundraiser called Tag Time Happy Hour, named after his targeted therapy, Tagrisso. While Jim benefited a lot from his daily pill – clean scans, shrinkage, tumors disappearing – it was still something he had to do every day that reminded him of his cancer. Kristina wanted to do something to make him feel less alone and make the occasion more positive.

“He took his pill every day between 5pm-6pm. Both Jim and I are in the hospitality industry, and in our business, 5pm to 6pm is happy hour. So, we decided that Jim’s daily pill time would become our daily happy hour. Whatever we all had to drink – milk, water, bubbly – we’d cheers and say ‘Happy Tag Time.’”

Soon, the happy hour gained momentum. Friends and family joined in, sending texts, emails, pictures, and videos of their own Tag Time Happy Hour. “Jim is pretty private and quiet, but I could tell it made him feel less alone.”

Kristina believes in the power of positivity. “It’s contagious,” Kristina explained. “Everyone needed to find joy during those early days of the pandemic, and our Tag Time Happy Hour sparked joy for other people.”

Kristina began to realize there was something really special about their Happy Hour. “People were transitioning out of the deepest, darkest days of COVID and wanted something to look forward to and feel hopeful about. I realized this might be something I could turn into an actual happy hour to raise money for lung cancer research.”

Both Jim and Kristina work in restaurants. Kristina reached out to her colleagues, explained about their nightly ritual, and asked if anyone would be willing to host a happy hour. She curated personalized happy hours and explained how restaurants could help raise money by participating in this travelling Happy Hour series.

“More people wanted to get involved than I even reached out to,” Kristina says. “More than 40 people in Philadelphia alone, where we live, plus people from California, Minnesota, Nashville, Chicago. It was amazing.”

People were so excited. Kristina provided ideas and marketing, and the movement grew from there. They had an Instagram, a website, and even t-shirts. Friends and colleagues from all over pitched in to help. In less than two months, Tag Time Happy Hour was able to raise over $100k.

“It was the most hopeful feeling to spark joy and give meaning to an overwhelmingly difficult situation,” Kristina said. “It was my way of coping and trying to take control of a situation in a joyful manner.” 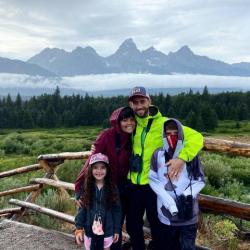 Kristina has always tried to find joy in her life. “Do I get upset? Yes. Do I have hard days and ugly cry into washcloth in our basement so no one can hear me? Yes, but you move through it. All days are hard but they aren’t all bad.”

Despite Kristina’s positivity, there are still hard moments. Once, Kristina’s son told her, “I’m the only kid I know with two parents with cancer.” This broke her heart. “I worry for their future. Who they’re going to have. What they’ll miss out on. That’s just the reality of this. It’s a really tough reality to swallow.”

But Kristina tries to stay positive. She’s very proactive about her cancer. “Right now, I still get home infusions, but it's to make sure the cancer doesn’t return. I tell the kids it is proactive and preventative. My last scan was clear and that’s something to celebrate.”

“I’m all about small moments,” Kristina says. “This is what I have, and I’m grateful for it. If you focus on what you’re losing, you’d never leave bed. You’d give up. We can’t. We have each other to fight for. We have our beautiful children to fight for. There are a lot of other people who need to see there’s another way to cope.”

So, what’s next for Tag Time Happy Hour? They are already in planning mode for next May and June, in Philly and beyond. Kristina wants to fund more research and raise more awareness, and hopes one day to take Tag Time Happy Hour from coast to coast.

“Starting this fundraiser was a way for me to get back to doing what I love and also a way for me to cope. I got to share our story and make real change. I realized the more I shared the more the universe finds ways of giving back to us, it’s about recognizing meaningful moments that happen each day.”

LUNGevity Spotlight is a way to highlight people living with lung cancer, caregivers, advocates, volunteers, and fundraisers who are making a positive impact in the LUNGevity community. We hope that their stories will inspire and encourage many more to get involved.