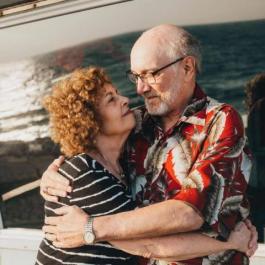 I was diagnosed with lung cancer by accident. I had requested a screening scan for an aortic abdominal aneurysm. When I got results from the scan back, everything was fine as far as aneurism was concerned, but there was a footnote on the scan; it said there was a spot on the liver and follow-up was recommended. This was the beginning of my journey.

I did not receive confirmation that I had cancer for almost a month. The doctors were able to confirm the spot on my liver was a tumor, but they wanted to do additional tests to confirm it was cancer. Before I had another procedure, I wanted a second opinion.

Lucky for me, I live near a major medical institution, and I was able to get a second opinion from one of the best specialists in my disease. However, even if you aren’t very close to a major medical facility, I encourage you to seek a second opinion from a specialist. Primary care doctors are amazing, but it’s important to talk to someone that specializes in cancer and is well-versed on advances in detection, diagnostics, and treatment of your disease; even better if that specialist is specific to your type of cancer.

Through a biopsy, the doctors at the major medical facility were able to trace the tumor back to the lung. I was diagnosed with stage IV adenocarcinoma lung cancer that had metastasized to my liver in August 2013.

I had no known mutations so I was given the standard of care at the time: a three-drug cocktail of chemotherapy – pemetrexed, bevacizumab, and carboplatin.  I was scared because I heard all the horror stories of side effects people have from chemo. I was very fortunate—I had no side effects.  I would go to the clinic early in the morning, get my treatment, and go to work after and feel fine.

Unfortunately, after 16 months, I became chemo resistant. Worse, there was nothing else FDA-approved that I could try. I knew from my research that there were some promising treatments still in trials. I talked to my oncologist about it, and it turns out there were about three or so trials locally available I might qualify for, all immunotherapy trials.

I was apprehensive about it because the drugs were not approved yet and there wasn’t sufficient data yet on if these drugs worked or the severity of potential side effects I might experience.  I was willing to try, though; there was a chance it might extend my life with good quality. If it didn’t work for me, at least they would have learned something that will help someone else down the road.

After some testing and review of my treatment history, I qualified for and began a phase 1 trial in January 2015. I received an infusion every week. After several cycles, significant side effects set in. Daily activities became more difficult and most of my days were significantly disrupted. Despite this, I continued, because there was a more than 70% reduction in my tumor size.

However, after seven months of soldiering through the discomfort in order to continue with the infusions, I was hospitalized for a week for side effects, primarily severe colitis. These side effects nearly killed me. After one more round of infusion with similar side effects, they removed me from the trial in late July 2015. I really appreciated that those running the trial cared about my health and safety and did not make me continue something that was damaging to me.

At the time, they said there was nothing else available at the moment that didn’t have the same side effects. So we played the “let’s wait and see” game.

In December 2015, my oncologist found another trial for me. This was again an immunotherapy trial. It was also a phase 1 trial. After reviewing potential side effects, which were similar to, but did not seem to be as disruptive as the same potential side effects I had in my last trial, I decided to proceed. I was approved in January 2016 and began treatment immediately. I was one of the original 18 participants on the trial.

This trial was drastically different from my first. It was an oral drug rather than infusion, so I only had to go to the clinic every four weeks to get bloodwork and, pending the lab results, pick-up a prescription refill of the trial drug. I had no significant side effects and even had some tumor reduction. Best of all, since January 2017, I have been stable! Today, I am still an active participant on the trial and am feeling well most days.

There are a lot of treatment options out there today, but when you exhaust these options, it’s worth considering alternatives such as clinical trials.  Even though my first clinical trial made me incredibly sick, I would absolutely recommend a clinical trial to someone else in a similar position. That trial kept me alive long enough to make it to my next trial. There is certainly the unknown involved when you are on a trial—the trial drugs may not work but they might, and they might work better than any other treatment that has ever worked; you may or may not be at least temporarily disabled by side effects.

Another perk I have experienced with my trials is that there was no out of pocket costs to me while on them. The company running the trial picked up most of the expenses and, if there is something they didn’t cover, my insurance picked up the rest of the cost. The lack of financial burden of my treatment is a huge plus for my family.

When you are given nine to twelve months to live, there are a lot of things that need to be done before you can’t do them anymore. After I was diagnosed, I made sure that my documents were up to date (will, durable power of attorney, medical surrogate, etc.) I also created two bucket lists: a twelve month list and a long-term list. Top of my short-term list was attending my 50th high school reunion, which was just a few months away at the time of my diagnosis. Not only did I get to attend that reunion, but I also made it to my 55th reunion five years later and am planning on attending my 60th and 65th reunions, if not more beyond that.

Now, more than six years after my diagnosis, I have completed almost everything in my bucket lists; the only remaining things are time-sensitive, of which I have no control. But I’m counting on my oncologist, my trial drug, and any future drugs that I may have to take to keep me in my stable status, if not better, so that I will be able to complete those things.

My family has good genes; both my parents and much of my extended family living into their 90s. When I was first diagnosed, I realized I might not make it that long. However, on my current treatment, I think making it to my 90s could be possible again.

Hear from people who benefitted from clinical trials

Edward Cutler lives in Tampa, Florida with his wife Donna. They have two adult children, each of whom is married, and three grandchildren. Ed continues to work as a tax consultant, even after his Stage IV Lung Cancer diagnosis in July 2013. In addition to his professional work, Ed has been an advocate for funding for the cancer center where he has been treated, as well as for other organizations involved with funding for research and for lung cancer awareness.