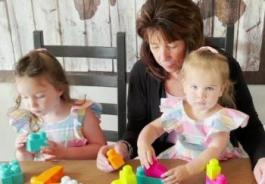 My lung cancer came suddenly and severely back in March of 2015.  It started with a sudden onset of what I thought was vertigo on a Wednesday. By Friday morning, it had changed dramatically, and I knew it was time to see a doctor.

I had just had my hip replaced and was not cleared to drive, so I called my mom for a ride. By the time we arrived at my primary care doctor’s, I had numbness in my right arm and was having difficulty putting my thoughts into words. It was very frightening. My doctor did a neurological exam, which I failed, and he sent me directly to the hospital to have an urgent head CT scan.

After the scan, the ER doctor came to tell me I had a brain tumor. These are still the scariest words I have ever heard. I was taken to a larger hospital, where I spent a week getting tests and scans. It was an awful week, made it more difficult by a loss of speech. I was unable to talk to my sons or my husband and tell them I was determined to fight hard and was going to do all I could to somehow beat this.

After my tests and scans, I learned that I not only had a brain tumor, but also a lung tumor and a pulmonary embolism, despite having no chest pain or any difficulty in breathing. It was such a shock.  All this meant I had stage IV non-small cell lung cancer and a grim prognosis.

I knew that lung cancer was the deadliest form of cancer, and that stage IV was not curable.  I later learned that the chance of living 5 years was extremely low, virtually almost zero.  To have such advanced cancer and to get sick so quickly made the situation feel graver.

At the time, I didn’t have grandchildren, but it was something I had always wanted. When I was diagnosed, it felt like that dream was snatched from me.  My sons were adults, but they were just starting out and it would likely be years before they would likely have children.  With my diagnosis and state of health, I didn’t think I would even live a year, let alone long enough for them to get married or start families.

My oncology team put together a treatment plan quickly. A second opinion confirmed this was the right treatment plan for me. I had my first treatment, stereotactic radiation for the brain tumor, in early May. By June, I had started chemotherapy.  At that time, those were pretty much the only options I had.  I had learned that I had a KRAS g12V mutation, but there was no drug available to target it.

At first, I did well. My scans showed my tumors were shrinking and my lung tumor was almost gone. However, in late October, my CT scan revealed that my lung tumor was back and growing very aggressively. My chemo wasn’t working, and I needed to try something else. My doctor decided I would do radiation and then try immunotherapy, which was relatively new at the time.

My doctors wanted me to postpone a family trip to celebrate Thanksgiving in California with my sons to start treatment. I refused. Because of my progression, I was afraid this year would be my last holidays, so spending time with my family was my priority. The doctors managed to fit my radiation in before my trip. Even though it was fatiguing, I was determined not to miss my trip.

I loved that trip, and it was one of the happiest times to be with both my sons and my new daughter-in-law (my son and his girlfriend eloped right before the trip). We were all together and that meant the world to me.

I started my immunotherapy treatments after we returned home. I wasn’t feeling overly optimistic because of how fast the chemo has stopped working. Fortunately, my first scan in February showed my tumor was shrinking. I was elated.

I stayed on the immunotherapy for 9 months. I had to stop after that because I had recurrent pneumonitis. It was more aggressive each time and the doctors worried if we continued treatment I would end up with a fatal case. My last infusion was in August 2016. 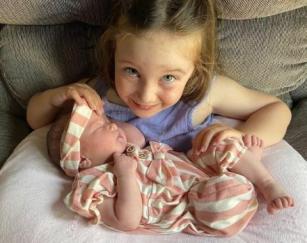 Despite not having treatment since, I am NED and am doing very well today. I never thought I would be a long-term survivor, but I am, and it’s getting longer every year. I was extremely lucky; if immunotherapy hadn’t been available when I progressed, I’m not sure I would be here today.

Even better: I lived to see grandchildren. Not one but three beautiful granddaughters: Harper arrived in 2017, Hazel in 2019, and, just three weeks ago, my newest, Haven joined our family. It’s amazing given the fact I didn’t think I would live to see any.

The girls bring me so much joy. I adore them all and love spending time with them and taking them to do things I did with my own sons.  We enjoy going to the park, taking walks with the dogs, going out to eat, or for an ice cream. It feels like a miracle that I could live not only to meet them, but have a relationship and build memories together.

This summer was the first summer I was able to take my two oldest granddaughters to the beach. This was a meaningful milestone. This beach is the one I grew up going to, where I learned to swim, and where I took my sons when they were younger.  Being able to take the girls and make new memories in this special place makes me feel so blessed.

Lung cancer changed my life forever. Although I’m currently NED, it’s like any other chronic disease; it’s always there, in the back of your mind. It’s been almost seven years since I was diagnosed, but part of me is still waiting for the ball to drop.

My grandchildren give me a whole new reason to keep fighting. I call them my “littlest inspirations” because I will do whatever it takes to be in their lives for a long time. While I have no idea what the future will hold, it’s my goal is to be here to see my granddaughters grow, go to school, and achieve milestones of their own.

The longer I live with this disease, the better I feel. I am starting to feel hopeful that immunotherapy could be a cure for me. I never dreamed I’d be here today.  I’m grateful for immunotherapy and the future it granted me with my family. I have hope that lung cancer research will continue so others can be where I am today as well. We’ve come so far since I was diagnosed, and I am so excited to see where the science goes next. 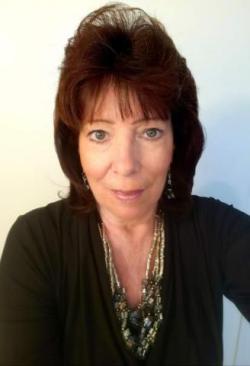 Lisa Haines is a stage IV lung cancer survivor who lives in Northeastern Massachusetts with her husband and two Rescue Chiweenie Dogs.  She is mother to two amazing adult sons: one in Massachusetts and one living in Southern California. She’s been blessed with three sweet granddaughters (Ages 4, 2 and 3 weeks), who came into her life after her diagnosis and truly were a dream come true.  At this time of her diagnosis, she did not have any grandchildren, but they were something she had always wanted. They are her world and her newest and greatest inspiration for doing whatever she can to be in their lives as long as possible.

Other than spending time with her granddaughters, she enjoys supporting other lung cancer patients and is very active with LUNGevity. Advocacy has become very important to her and it’s something she wants to become more and more involved with.

Lisa, you are amazing,…

Lisa, you are amazing, strong and an inspiration! Keep up the good work <3

Thank you for sharing your…

Thank you for sharing your story. I think you and my Dad have/had the same variation. My heart feels like there's hope too, despite what he and the science seem to say. It's pretty dark right now, but I have a feeling he and I are going fishing next summer.