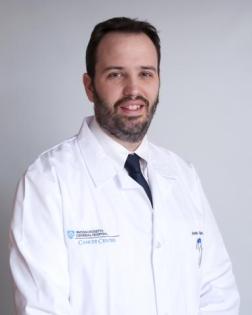 In the past decade, researchers have identified many types of lung cancer, including ALK-positive lung cancer, a subset of non-small cell lung cancer (NSCLC) resulting from the fusion of the ALK gene with another gene (usually EML4). It is found in about 5% of NSCLCs.

“The original hope was that ALK-positive lung cancer patients would be able to move on to immunotherapy after they develop resistance to TKI therapy. But, unfortunately, that has not been the case,” explains Justin Gainor, MD, an assistant professor at Harvard Medical School and director of the Center for Thoracic Cancers and director of Targeted Immunotherapy at Massachusetts General Hospital.

One of these research projects is an ambitious and exciting project spearheaded by Dr. Gainor. “The goal of our research is to try to understand why the immune response is not being sufficiently triggered in ALK-positive patients and to try to identify new vulnerabilities to immune-based therapeutics for these patients.”

Dr. Gainor’s team is taking a multipronged approach to improve outcomes for ALK-positive patients with short-term and long-term research goals. First, they are analyzing the genetic make-up of ALK-positive tumors to determine whether these tumors are sufficiently “foreign” to the immune system to generate a response.

Dr. Gainor’s team is especially interested in understanding how a patient's T-cells (specialized immune cells that can recognize and kill cancer cells) interact with ALK-positive lung cancer cells. This knowledge will be especially useful in developing treatments to enhance T-cell activity.

One of the team’s short-term goals is to create an online tissue collection portal to enable ALK-positive patients to contribute their old biopsy slides to a data repository that will be available for researchers interested in studying ALK-positive lung cancer. The project, which has been titled ENIGMA+ (“Elucidating Novel Immune and Genomic Markers for ALK+”), is expected to foster research in this field and will be available by the middle of 2020.

The long-term goal for the research team is to develop a new kind of therapy, in which researchers would harvest immune cells from a patient, engineer T-cell receptors to recognize the ALK-positive tumor cells, and then return the cells to the body to initiate an immune response.

“Our bold vision is to essentially design a living drug. To make that happen, it is crucial for us to lay the basic science groundwork in the coming years,” notes Dr. Gainor. “We’re hard at work to make that vision a reality. With the momentum and support from the ALK-positive community, I am looking forward to seeing major improvements for ALK-positive patients and their families."

uhi Kunde, MA, is a science writer for LUNGevity.