Finding lung cancer early, when it is easiest to treat, can save lives.

To help you understand and share this information, you can view our free booklet and Lung Cancer Basics on lung cancer screening and early detection that summarize the detailed information in the following sections.

However, currently, only 18% of lung cancers are diagnosed while the tumor is still localized—that is, only found at the site where it started. This is commonly referred to as stage I. The major challenge is that most people with lung cancer only have symptoms when they are in later stages of the disease, so lung cancer is not usually suspected and discovered until it has had the chance to grow and spread.1 How can lung cancer be detected early?

Lung cancer can be detected early via screening.

Screening for lung cancer means checking for cancer before there are any symptoms. Examples of commonly used screening tests for cancer are mammograms for breast cancer, colonoscopies for colon cancer, and the PAP smear and human papillomavirus (HPV) tests for cervical cancer.2

For lung cancer, early-detection screening by a low-dose computed tomography (LDCT) scanA form of CT scan that uses less radiation than a standard chest CT (also called low-dose spiral CT scan or helical CT scan) has proven to be effective among individuals considered to be at high risk. It is also only recommended for these individuals. The usefulness of LDCT in high-risk individuals was demonstrated by the National Lung Screening Trial (NLST) and confirmed by the Nederlands-Leuvent Longkanker Screenings Onderzoek (NELSON) trial.

LDCT is much more sensitive than chest X-raysA type of radiation used in the diagnosis and treatment of cancer and other diseases and can detect smaller abnormalities that may be lung cancer. Chest X-rays are not recommended for lung cancer screening because they often miss early-stage lung cancers and have not resulted in decreased mortalityDeath rate, or the number of deaths in a certain group of people in a specific period of time. This is also the case for sputumMucus and other matter brought up from the lungs by coughing cytology, a test that checks for abnormal cells in sputum.3

The National Lung Screening Trial (NLST) and the NELSON Trial

The National Lung Screening Trial (NLST) was funded by the National Institutes of Health (NIH). It used an annual LDCT to screen for lung cancer. Over 53,000 current and former heavy smokers aged 55 to 74 participated at 33 sites across the United States. Starting in August 2002, participants were recruited over a 20-month period, randomly assigned to receive three annual screens with either an LDCT or a standard chest X-ray, and followed for several years to determine whether an LDCT and an X-ray were equally effective in catching lung cancer early. The study found that those who were screened with an LDCT had a 20% lower chance of dying of lung cancer than those who were screened with a chest X-ray.4

More recently, the results of the NELSON trial confirmed that LDCT is effective in reducing lung cancer mortality. The NELSON trial began in 2000, included 15,789 participants, and ended in 2015. All participants were followed for up to at least 10 years. The risk of dying of lung cancer decreased by 25% among those who received screening.5

Who should be screened for lung cancer?

There are several sets of guidelines, including the ones outlined below, to help determine who should be screened by LDCT for lung cancer. These guidelines are primarily based on active (current or prior) tobacco exposure. The guidelines have been established in large part from the results of the National Lung Screening Trial (NLST). They are very similar, with the differences primarily related to the role of screening for the oldest patients and risk factors other than smoking. All of the patients who are recommended for screening are considered to be at high risk for developing lung cancer but do not currently have any symptoms to suggest that they do have lung cancer. Patients should discuss these guidelines with their doctor and understand the risks and benefits before undergoing LDCT screening.

The guidelines from the US Preventive Services Task Force (USPSTF) include annual screening with LDCT in adults who:6

The USPSTF recommends that lung cancer screening stop once a person:6

The Centers for Medicare & Medicaid Services (CMS) covers costs associated with lung cancer screening based on the USPSTF criteria.

The guidelines from the National Comprehensive Cancer Network® (NCCN®) include annual screening with LDCT for individuals in two high-risk groups. These are adults who are either:7

The NCCN® guidelines suggest follow-up screening. Usually the next LDCT will occur after one year, but this depends on the doctor's recommendation based on the screening test results.7

The guidelines from the American College of Chest Physicians (CHEST®) include an annual screening with low-dose CT scans in adults who are:8

What about screening for those who do not meet the current screening criteria?

The current criteria for lung cancer screening are based on active tobacco exposure. If you feel that you may have been exposed to other risk factors of lung cancer (read about risk factors here), you may choose to discuss the possibility of screening with your doctor.

What is a lung (pulmonary) nodule?

The abnormalities that can be detected by the LDCT are known as lung nodules. They may also be referred to as pulmonary nodules. Nodules are tissue growths that appear as round or oval-shaped white shadows. Lung nodules are very common, and most are not cancerous. In fact, only about 4% of nodules detected by screening are cancerous. What happens if one or more nodules are found, and how it is determined whether a nodule is cancerous, are discussed in a later section.7,12

A nodule is characterized by:7 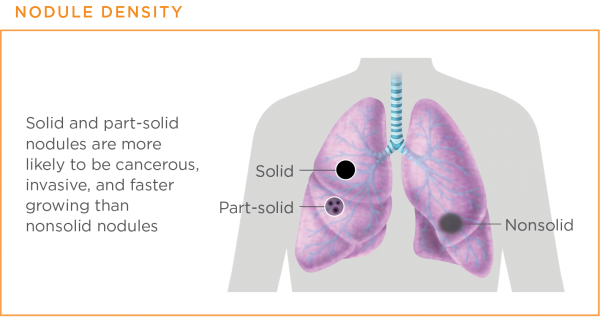 What can cause lung nodules to form?

What to expect during a low-dose CT (LDCT) screening scan

The LDCT scan is a computerized X-ray imaging procedure that yields detailed pictures, or scans, of areas inside the body. Because the scanning produces multiple images from different angles, it can show both two-dimensional (2D) and three-dimensional (3D) images of anything abnormal in the chest. LDCT images show more detail than a traditional X-ray.14

LDCT is a painless and noninvasive procedure; the patient needs no dyes or injections and has nothing to swallow.15

A CT scan can provide very detailed information, including the size, shape, or location of an abnormality. However, a scan cannot diagnose whether or not an abnormality is cancer. What happens when a pulmonary nodule is found is discussed in a later section. 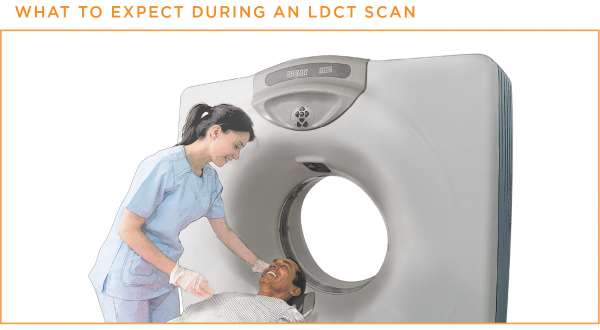 What else to know about lung cancer screening

It is important to keep in mind that an LDCT can find other abnormal growths in tissues outside the lungs (incidental nonpulmonary findings). These findings need to be followed up on by your doctor or specialist.

What is shared decision-making? Why is it important for lung cancer screening?

Ideally, the decision to be screened or not should be made together by the patient and the patient's primary care doctor or pulmonologist. The doctor knows the patient's history and possible risk factors best and can help guide the patient to the right screening center. (Some screening centers require a doctor's prescription in advance for a scan. Others will do an evaluation, also called a risk assessment, without a prescription to determine whether a patient's history and risk factors warrant a scan.) In most cases, before screening is initiated, a face-to-face visit between you and your primary care doctor or pulmonologist is required. During this visit, the doctor will ask you for specific information relating to your current and past cigarette use, and together you will discuss the benefits and harms of CT lung screening and tobacco cessation counseling. This is termed a shared decision-making visit. Information gathered and documented in the office visit notes (medical record) will determine whether you are eligible for an LDCT lung screening program.18

The NCCN® recommends going to screening centers that:7

What happens if a lung nodule is detected during lung cancer screening?

An LDCT can detect lung (pulmonary) nodules—small and roundish or oval growths of tissues in the lung that appear white on an LDCT—with great accuracy. However, an LDCT does not indicate whether the nodule is cancerous or not. Pulmonary nodules are associated with infectious and inflammatory diseases as well as with lung cancer. As discussed earlier, most pulmonary nodules detected by LDCT are benign, that is, not cancerous.7,17

Based on whether a lung nodule is detected during the baseline screening, the NCCN® recommends the following:7

If no nodule is detected at this screening, the next LDCT should be in 12 months, with additional follow-ups every 12 months after that. The doctor will determine how many follow-up screenings the patient needs.

If one or more nodules are detected at the baseline screening, additional tests (including a CT and/or a PET/CT scan to get a clear view of the nodules and what is going on throughout the body) or a follow-up LDCT sooner than 12 months may be indicated. The type of follow-up recommended—and the timing of follow-up LDCTS—is based on several factors:

If at baseline or at a follow-up LDCT, a nodule's characteristics make it of high concern for lung cancer, either a biopsy or surgical removal of the nodule will be done to confirm whether the nodule is cancerous. If the patient does have lung cancer, further tests may be needed to determine the stage. For early-stage patients, treatment will be surgery or SBRT. For advanced-stage patients, treatment will begin, ideally after comprehensive biomarker testingAnalyzing DNA to look for gene mutations that can be treated with targeted therapy drugs and measuring the level of expression of the PD-L1 protein to determine the likelihood of a good response to immunotherapy drugs takes place and a personalized treatment plan is developed.

For detailed information about the NCCN® guidelines for baseline and follow-up screenings, refer to NCCN® Guidelines for Patients: Lung Cancer Screening.

The higher the score, the higher the probability of the nodule being cancerous and requiring follow-up. Not all LDCT results are reported in Lung-RADS® at this time.

Advances in imaging techniques, such as the LDCT, have improved the chances of finding lung cancer early. Researchers continue to look for other techniques that could help identify lung cancer at an early stage. More sensitive tests that can find evidence of lung cancer in sputum or blood, even before the cancer is seen on a CT scan, are being studied. Research is also being done on whether biomarker testing can identify which patients have a higher risk of lung cancer. There are many clinical trialsType of research study that tests how well new medical approaches in screening, prevention, diagnosis, or treatment work in people underway looking at these approaches to screening as well as others.

For detailed information about clinical trials and the potential benefits and risks of participating in one, read about them in Clinical Trials.