Discussed in this section is traditional, or standard, chemotherapyTreatment that uses drugs to stop the growth of cancer cells, either by killing the cells or by stopping them from dividing. Chemotherapy is a treatment that uses drugs to stop the growth and division of tumor cells. While each patient responds differently to chemotherapy drugs, chemotherapy treatment can shrink lung cancer tumors, alleviate lung cancer symptoms, and extend life. Chemotherapy can be used at all stagesThe extent of cancer in the body of lung cancer and for both non-small cell lung cancer (NSCLC)A group of lung cancers that are named for the kinds of cells found in the cancer and how the cells look under a microscope and small cell lung cancer (SCLC)An aggressive (fast-growing) cancer that forms in tissues of the lung and can spread to other parts of the body. The cells look small and oval-shaped when looked at under a microscope..

To help you understand and share this information, you can request our free booklet that summarizes the detailed information in the following sections.

Chemotherapy has been used as a cancer treatment for many years and remains important despite the addition in recent years of newer types of drug treatment—targeted therapiesA type of treatment that uses drugs to identify and attack specific types of cancer cells with less harm to normal cells, angiogenesis inhibitorsDrugs given during cancer treatment to prevent the growth of new blood vessels that tumors need to grow, and immunotherapyA type of therapy that uses substances to stimulate or suppress the immune system to help the body fight cancer, infection, and other diseases—that attack cancer in a different way. Chemotherapy may be used as a single drug or in combination with other chemotherapy drugs, in combination with some of the newer treatments, and with surgery and radiation therapyThe use of high-energy radiation from X-rays, gamma rays, neutrons, protons, and other sources to kill cancer cells and shrink tumors to make them more effective.1 Your healthcare team will help to select the best treatment based on your medical history, your overall health and any other medical problems, the stage of your lung cancer, and your preferences.

How does chemotherapy work?

Healthy, normal cells grow and divide in an orderly manner, per the instructions encoded in the genes, to replace dead, old, or damaged cells. 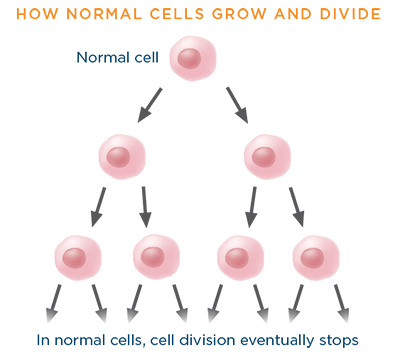 When a gene has an alteration in its DNA code of instructions, it is said to be "mutated." MutationsAny change in the DNA or gene sequence of a cell.  Certain mutations may lead to cancer. occur often, and normally the body can correct them. The correction method is similar to a "spell check" function on a computer or cell phone. However, sometimes the "spell check" function does not work as it should, and the DNA mutation may become part of the cell's blueprint. Over time, an accumulation of mutations can cause cells to lose the capacity to grow and divide in an orderly manner. Out-of-control growth may occur instead, which can lead to the formation of a tumor.3 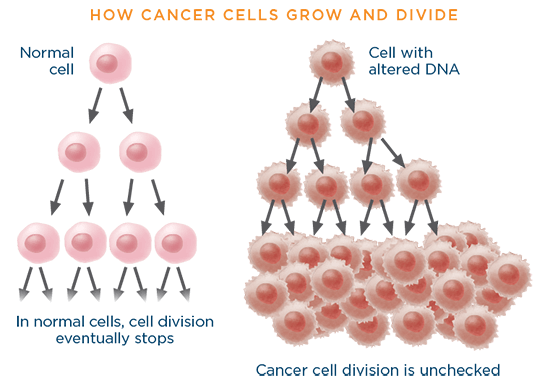 Chemotherapy drugs work by damaging the DNA inside the nucelus of rapidly gowing cells or by keeping the cells from dividing and growing. This may happen either when a cancer cell is making copies of its gene or when the cancer cell is about to divide.2

Chemotherapy drugs are most often used systemically; that is, they travel throughout the whole body (the system) via the bloodsteam to reach and attack cancer cells wherever they may be. However, chemotherapy attacks not just fast-growing cancer cells but also fast-growing healthy cells. Targeted therapy drugs, each of which is intended to treat cancer that has a particular mutation, are aimed at specific signaling pathwaysA group of molecules in a cell that work together to control one or more cell functions that cancer cells use to thrive, blocking them in the same way that blocking a car's fuel line would keep it from running properly. Targeted therapies are more precise than chemotherapy drugs, which may make them more effective. However, not all cancers have a mutation that has a matching targeted therapy.

Immunotherapy drugs do not attack cancer cells directly; they work by strengthening the body's own immune system's ability to recognize cancer cells and selectively target and kill them.4,5

How is chemotherapy administered? 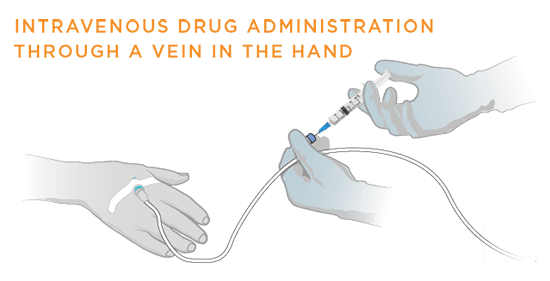 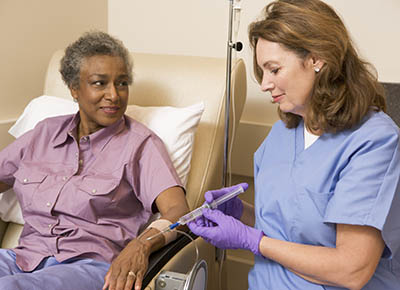 Sometimes a chemoportA device used to deliver the chemotherapy drug. It is placed under the skin, usually in the chest, and attached to a catheter that is guided into a large vein, the superior vena cava, above the right side of the heart. may be placed under the skin. The chemoport may stay for a few weeks to months and helps in the administration of the chemotherapy drug while avoiding multiple needle pricks.7 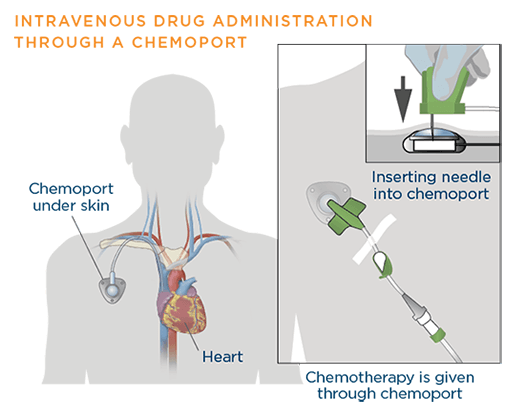 Chemotherapy may be given one drug at a time or as a combination of different drugs at the same time. Usually chemotherapy is given in cycles. A typical cycle consists of a period of treatment of 1 to 3 days, followed by a break before the next treatment is given so that a patient can rest and allow the body time to recover. A chemotherapy cycle generally lasts 3 to 4 weeks and continues over a period of months. Sometimes chemotherapies are planned for a specific number of cycles, typically 4-6 cycles. In other situations, chemotherapy is planned to be continual—on an ongoing basis as long as it is tolerated and controlling the cancer.8,9

The number of treatments within a cycle, the length of a cycle, and the number of cycles to be given may vary based on the type and stage of lung cancer and the drug(s) being given. It is always a good idea for you to check with your healthcare team to understand your treatment plans, including:

There are a number of things you can do to help prepare for chemotherapy treatment. Your healthcare team will advise you on these. They may include:10,11,12

When combination chemotherapy is used (because the drugs work in different ways and may be more effective together), usually it is the drugs made with platinum—carboplatin (Paraplatin®) and cisplatin (Platinol-AQ®)—that are used with another drug.14

Combination chemotherapy is usually the main treatment for patients with SCLC as the first round of chemotherapy. As with NSCLC, the combinations are most often a platinum-based drug (carboplatin [Paraplatin®] or cisplatin [Platinol-AQ®]) that is combined with another drug; cisplatin (Platinol-AQ®) and etoposide (Etopophos®) is most often the first combination chemotherapy used.17  There is another chemotherapy drug used specifically for adult patients with extensive-stage SCLC whose cancer has progressed on or after platinum-based chemotherapy. This is lurbinectedin (ZepzelcaTM).20

When is chemotherapy given for lung cancer?

Chemotherapy is among the treatment options, but never the only option, at all stages of both NSCLC and SCLC. Note that treatment options develop over time; your healthcare team may suggest other options that are not outlined below.

When given along with other treatments, the chemotherapy is referred to as advjuvant, neoadjuvant, or concurrent.

In NSCLC, chemotherapy may be used as the main treatment, but it is also frequently given along with other treatments.

Stage III NSCLC: Chemotherapy is frequently used in stage III treatment, either alone or in combination with external beam radiation therapy (EBRT), a type of radiation therapy. In those cases where surgery is performed, chemotherapy may precede or follow it, either with or without radiation.19,23

Stage IV NSCLC: Treatment of stage IV NSCLC patients with chemotherapy depends on the performance status of a patient and whether their cancer has a driver mutationA change in the DNA of a gene that leads to the development or progression of a tumor (as determined by biomarker testingAnalyzing DNA to look for a gene mutation that may indicate an increased risk for developing a specific disease or disorder). Your healthcare team will use one of several scales, such as the Eastern Cooperative Oncology Group (ECOG) Performance Scale, to measure your general health to help determine which treatments, including chemotherapy, that may be the best for you.21,22

Chemotherapy treatment options for patients with stage IV NSCLC may include:23

In small cell lung cancer (SCLC), for which there are fewer treatment options than in NSCLC, chemotherapy is usally the main treatment for two reasons:

For limited-stage SCLCSCLC found in one lung, the tissues between the lungs, and nearby lymph nodes only, your healthcare team may recommend these chemotherapy options:37

​For extensive-stage SCLCSCLC therapy to the head to reduce the risk that cancer will spread to the brain, your healthcare team may recommend these chemotherapy options:37

Why there are side effects from chemotherapy drugs

The most common side effects of chemotherapy in both NSCLC and SCLC are:25,38

Note:  Each chemotherapy drug has a different set of most common side effects. Likewise, each person differs in their response to chemotherapy. Just because a side effect is possible doesn’t mean that you will experience it.

While most of the side effects of chemotherapy stop after treatment, some side effects may continue, recur, or develop later. Among the serious long-term effects may be heart disease, another type of cancer, low levels of thyroid hormones, fertility issues, and cognitiveRelating to conscious intellectual activity, such as thinking, reasoning, or remembering problems. These can occur even years after treatment is completed.  For that reason, it is essential if you receive chemotherapy that you are followed up throughout your life by a healthcare team that is aware of the potential side effects of treatment.25,38

Managing the side effects of lung cancer chemotherapy

When I was told I had cancer, one of the first images that popped into my head was of me being bald and frail from chemo. So one of the biggest lessons for me has been that the chemo with which I was treated doesn't cause the side effects I had come to associate with cancer treatment.

It is important to discuss each chemotherapy drug with your healthcare team to be prepared for potential side effects and to understand what can be done to treat them. The healthcare team can often prescribe drugs or make recommendations about other ways to help relieve and/or prevent many of these side effects. Be sure to communicate with the healthcare team if and when new side effects begin, as treating them early on is often more effective than trying to treat them once they have already become severe. Sometimes the doses of the chemotherapy drugs may need to be lowered or treatment may need to be delayed to prevent the side effects from being worse.

Some specific ways in which the common side effects of chemotherapy drugs are sometimes managed are listed below; this list is by no means comprehensive. Again, discuss side effects with your healthcare team to determine the best approaches to managing them given your particular situation.

What clinical trial options are available?

If you are considering participating in a clinical trial, start by asking your healthcare team whether there is one that might be a good match for you in your geographic area. In addition, here are several resources to help you find one that may be a good match: