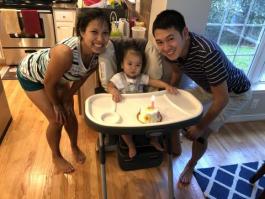 In 2017, I was a medical resident. I heard from more senior residents in my Oral and Maxillofacial Surgery (OMFS) program that you could have a normal life in the five months of the anesthesia rotation. It seemed like perfect timing because I started having soreness in my back around the same time; I figured with all this extra time I would have on anesthesia, I could start hitting the gym again to work on my six-pack.

That was a bad idea. After the first time at the gym, my back started hurting even more than before. I started to have aches and muscles spasms throughout my back and abdomen that became so painful, it was difficult for me to walk or lay down. I resorted to sleeping on the sofa in a semi-reclined position for over a month. I thought all of this may be due to a herniated disc and that physical therapy and time would take care of it. However, over time, the pain worsened and I started to develop numbness in my legs.

December 16, 2017 was the day my life would change forever. The numbness in my legs had finally gotten to the point where I couldn’t ignore it any longer. I went to the emergency department (ED) to get an MRI. After the scan, I knew something was wrong because they wheeled me directly into the room where the radiologist was. From my own medical training, I knew this was definitely outside of protocol.

The on-call radiologist talked me through the scans. He explained that there were lesions in several parts of my spine and that my pain and numbness was due to a compression fracture at the T11 vertebra. He told me it was likely cancer or multiple hematomas, the latter of which would be really rare. He recommended further CT and MRI scans to find out for sure.

I wasn’t sure how to break the news to my wife Varisara. I couldn’t believe that I could have cancer at 30 years old. I was silent for several minutes because I couldn’t say the words without stumbling through them. Finally, I managed: “It’s either multiple hematomas or” – my throat caught as I said it out loud – “cancer.” She was dumbfounded.

About an hour after my CT scan, the radiologist walked into my room with a bag of snacks from the cafeteria. I knew it was the worst case scenario. Radiologists never visit patients, especially not with a bag of treats. He explained that they found a cavitary lesion in the left upper lobe of my lung as well as enlarged lymph nodes in my chest. The good news was that my brain and rest of my body was clear; the bad news is that it has already spread from the lungs and into my spine, which automatically made it stage IV cancer, the most advanced stage.

“What am I going to do about residency?” I asked. I had worked tirelessly to achieve my dream of becoming a surgeon.

“You’ve got bigger fish to fry, my friend,” the radiologist responded. “You gotta batten down the hatches and get ready for a long ride.”

When faced with such a devastating diagnosis, your priorities in life come into perspective. I wondered how I was going to make sure my wife and 15 week old daughter were going to be ok. I wondered if and how I was going to finish residency. I realized none of that mattered right now; all that mattered was that I knew I had to do everything in my power to fight this evil disease so I could worry about all those other things.

And fight I did. My experience as both a doctor and a lung cancer patient has taught me you have to be your own advocate and manager of your health.  No one will fight for your health as much as you will. Doctors have so many patients and get pulled in so many directions.  Rarely do doctors know about every appointment you have had with other doctors.  To help keep my doctors up to speed, I kept a good log of my own medical information to review each appointment.

I also committed to educating myself more on my disease. I try to keep up-to-date on current advances in treatment options. This can be as easy as connecting with other patients with similar diagnoses through Facebook or other online platforms, where advances in research and standards of care are discussed. It is essential that you are the expert in your own health and disease.

It’s hard to imagine working while undergoing cancer treatment, but I found it was not as difficult as I had initially anticipated.  At first, I assumed there was zero chance I would ever go back to a grueling 60-80 hour work week.  Once I started a targeted medication, with minimal side effects that shrank all my tumors, I started contemplating going back to work. Nobody knows how long they are going to live, regardless of whether or not they have cancer, and I knew that if I was still on this earth for another 10 years, I would be so angry at myself for not finishing my residency.

There are also so many reasons to be hopeful. This spring, I attended the International Lung Cancer Survivorship Conference. It was great to see other lung cancer survivors living full lives, despite being diagnosed with lung cancer. Many lung cancer survivors are living normal daily lives, even years after diagnosis, with a few tweaks and adjustments. After the weekend ended, I felt excited and re-energized to fight this battle.

Before I was diagnosed, all I knew about lung cancer (or cancer in general) was that it was a terminal illness. Now that I’ve lived it, I know that lung cancer is not an automatic death sentence.  Patients with stage IV lung cancer are living longer and more quality lives than ever before due to advances in medicine, especially targeted therapy and immunotherapy.

The best advice I can give is to not fear the future and live in each moment; hope and a positive attitude go a long way in helping to shape your life after diagnosis. 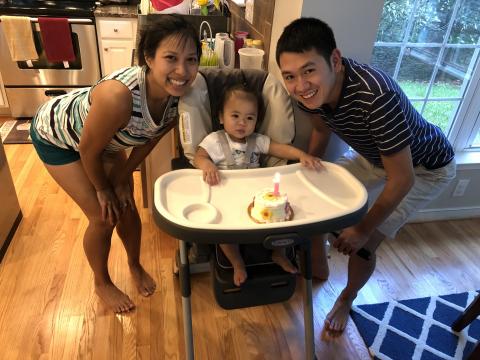 Dan Tran lives in Richmond, VA with his wife, Varisara, and toddler daughter, Avery. In December 2017, he was diagnosed with stage IV adenocarcinoma of the lung, but that hasn’t stopped him. Since his diagnosis, he has continued to travel the world and is entering his final year in residency for oral and maxillofacial surgery at VCU medical center.