A Survivor’s Experience with Biomarker Testing and TKI Treatments 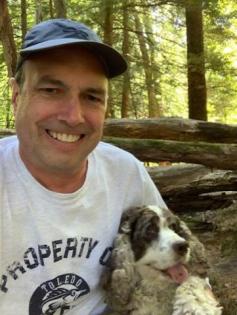 Normally, it would have meant a return to chemo for treatment.

But instead, thanks to a biomarker test that found an epidermal growth factor receptor (EGFR) mutation in the cancer cells, Dan was eligible for a new targeted treatment plan. Dan and his team were optimistic about the path ahead.

Biomarker testing gives healthcare teams more information about the specific type of lung cancer someone has. It opens the door for treatment plans that focus on a specific part of the cancer cells to prevent further growth.

Finding Dan's EGFR mutation meant he had the option of taking a tyrosine kinase inhibitor (TKI) drug. He didn't have to go through chemotherapy again.

"Chemotherapy had the worst side effects of any treatment I've tried. But with the different TKIs I've used, the side effects come and go. Every once in a while, they remind you that you're in treatment for a week or so, but then they'll disappear for a period," says Dan.

His specific TKI side effects include tiredness, nausea, and cramping. Still, Dan's treatment plan since 2014 is taking one pill each day. The results are slowed cancer growth and the ability to meet his life goals.

"After being diagnosed, I was focused on surviving long enough to see my kids graduate high school. Now I'm getting to see my oldest graduate college."

Dan has moved between three different TKIs since 2014 as his cancer grows resistant to the medication, a common and expected outcome for survivors on TKI medications. However, research advances have meant there's a new medication for Dan to switch to.

"My view on treatment is that I just need to find a medication that works long enough for a new medication to be approved with better results. There's always the hope that the next medication can do even better. We need to survive until the next thing comes."

Surviving for Dan means continuing to work as a family doctor during treatment. Meeting with his own patients, some of whom have cancer, confirms Dan's belief that there are plenty of positive stories among cancer survivors.

He hears about the successes of others and has first-hand experience of the life-changing benefits of biomarker testing and TKI treatments. They've not only extended his life but given him a clear plan going forward.

These are the types of stories Dan says need to be shared. Too often, he hears the negative ones when telling people he has lung cancer. Yet he knows that research continues to create better treatments for him and others.

The No One Missed project has more information on biomarker testing and how to start a conversation with your doctor.