Surgery—the removal of a tumor and some healthy tissue around the tumor during an operation—is a treatment option in lung cancer only when the patient is healthy enough for surgery, and the tumorAn abnormal mass of tissue that results when cells divide more than they should or do not die when they should:

When surgery is an option in a patient with non-small cell lung cancer (NSCLC)A group of lung cancers that are named for the kinds of cells found in the cancer and how the cells look under a microscope; the most common kind of lung cancer, it is the main treatment because it provides the best chance for a cure.  Surgery can be used for NSCLC patients with stage I, stage II, and some stage IIIA lung cancers. It is not used for stages IIIB  and Stage IIIC lung cancers, or for stage IV NSCLC, which is metastatic.1,2

Lung cancer surgery may be used in combination with chemotherapyTreatment with drugs that kill cancer cells and/or radiation therapyThe use of high-energy radiation from x-rays, gamma rays, neutrons, protons, and other sources to kill cancer cells and shrink tumors. Chemotherapy and radiation therapy may be given either before surgery (neoadjuvantTreatment given prior to the main treatment in order to shrink a tumor) (for NSCLC stage IIIA lung cancer patients) or after surgery (adjuvantCancer treatment given after the primary treatment in order to kill unseen cancer cells or to lower the risk that the cancer will come back) for all NSCLC patients who undergo surgery, in order to eliminate any small amount of cancer that was not detected and removed by surgery.1,2,3

Patients should discuss with their healthcare team whether surgery is the best option for them. Lung cancer surgery is a complex operation that can have serious consequences. Therefore, it should be performed by a thoracic surgeon—a surgeon specially trained in operating on people with lung cancer. Patients often seek a second opinion with a thoracic surgeon when considering surgery.4

What is the goal of surgery in the treatment of lung cancer?

The goal of lung cancer surgery is to completely remove the lung tumor. The tumor is removed along with a border, known as a margin, of healthy tissue surrounding the tumor. The tumor is said to have clear margins if the pathologist who examines the tumor tissue after the surgery finds no cancer in the margin.

During surgery, nearby lymph nodesA rounded mass of lymphatic tissue surrounded by a capsule of connective tissue in the lung and middle portion of the chest are also removed to check them for cancer and to help determine whether further treatment is necessary.4

What are the different types of surgery used in lung cancer?

Following are descriptions of different approaches that may be used:2,4,5,6,7

Lobectomy is the removal of one of the five lobesA portion of an organ of the lung. When non-small cell lung cancer (NSCLC) is detected at an early stage, a lobectomy is the most effective type of surgery, even when the lung tumor is very small. 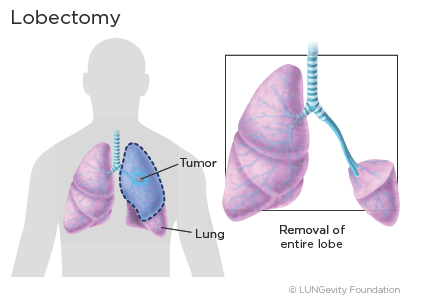 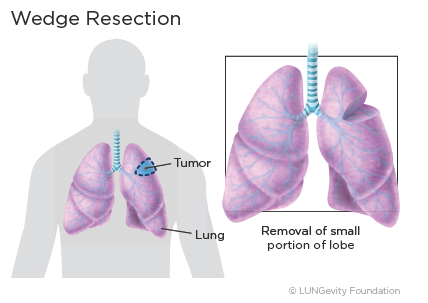 A segmentectomy removes one of the small segments within the lobes of the lung that contains a cancer. The amount of lung tissue removed is between what is removed in a lobectomy and in a wedge resection. Like wedge resection, it is recommended only for treating lung tumors that are 2 cm or less wide or, as with wedge resections, if the patient has poor lung function and/or other medical conditions that make removing the entire lobe dangerous. 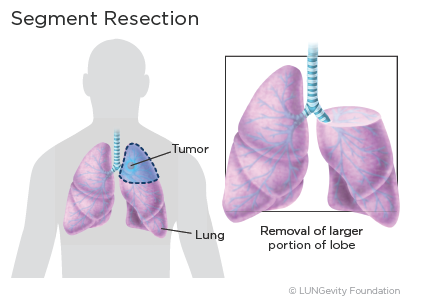 Pneumonectomy is the surgical removal of the entire lung. This type of surgery is usually required if the tumor is very large or is close to the center of the chest. 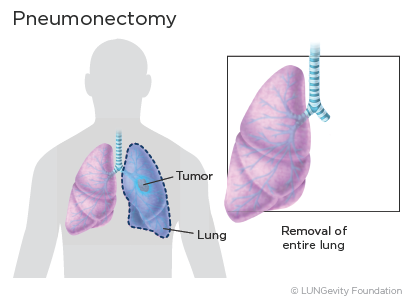 This surgery is used for tumors that involve the large airways. The tumor and a portion of the airway are removed and the ends of the airway are rejoined so remaining lobes can be left in place. A surgeon may perform this type of surgery rather than a pneumonectomy in order to preserve more lung function. 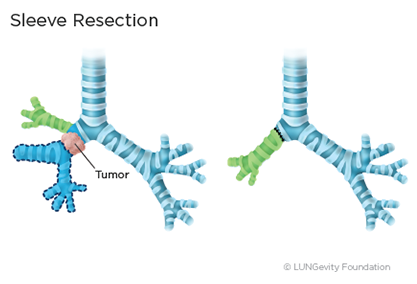 What are the different techniques used to perform lung surgery?

This surgery is performed in an operating room with general anesthesiaMedicine that puts the patient in a deep sleep. The surgeon makes an incisionA cut made in the body to perform surgery between the ribs on the side of the chest or on the back in order to examine the lung and remove the tumor, surrounding tissue, and nearby lymph nodes. After the surgery, a patient will have a tube (or tubes) coming out of the chest to drain excess fluid and air from the space around the lung while the lung heals. Once the fluid drainage and air leak subside, the tube(s) will be removed. Generally, the hospital stay after a thoracotomy is 5 to 7 days, followed by a period of recovery at home.8,9

A thoracoscopy is a minimally invasive surgery that uses small incisions and small instruments to examine and perform operations in the inside of the chest. It is also known as video-assisted thoracic surgery, or VATS. This procedure requires a great deal of technical skill and should only be performed by a surgeon who has specific training and experience in it.

VATS to remove lung cancer is done in an operating room under general anesthesia. During the operation, a thin tube with a light and a tiny video camera on the end is placed through a small incision on the side of the chest. The view inside the chest is transmitted onto a television monitor. The surgeon can look around freely inside the chest, watching the image on the TV screen. One or two other small incisions are used for long instruments that are used to do the same operation that would be done using a thoracotomy. If a lobectomy or pneumonectomy is done, one of the incisions will be enlarged to allow the tumor and lung tissue to be removed.5,9

Since only small incisions are needed in a VATS, there is less pain after the surgery and a more rapid recovery. Chest tubes are required for most VATS procedures, and patients typically remain in the hospital for a few days until the drainage of fluid and air subsides. Research has shown that the cure rate after a VATS is similar to surgery done with a thoracotomy. However, less pain, fewer complications, and shorter hospital stays—four or five days—have been found with VATS.5,9

A newer type of minimally invasive operation known as robotic-assisted surgery is being performed at some large cancer centers in the U.S. In this approach, a surgeon sits at a control panel, inside the operating room, using robotic arms to maneuver the surgical instruments. Robotic surgery requires special training and expertise. Results from robotic-assisted lung cancer operations have been found to be comparable to those from VATS.9,10,11

What determines the length of the hospital stay after lung cancer surgery?

How long a patient needs to stay in the hospital after surgery will depend on:12

How can patients manage the effects of lung cancer surgery side effects?

Common side effects and management techniques for lung cancer surgery may include:

What are the risks of lung cancer surgery?

Lung cancer surgery carries risks like any surgery, including:5

Other risks that specifically may occur after lung surgery include:9