To help you understand and share this information, you can request our free booklet that summarizes the detailed information in the following sections. (This booklet was produced in February 2016, before the approval of several targeted therapies and immunotherapy drugs. Information about these drugs can be found in this section as well as in the Targeted Therapies and Immunotherapy sections of this website.)

What is lung adenocarcinoma? 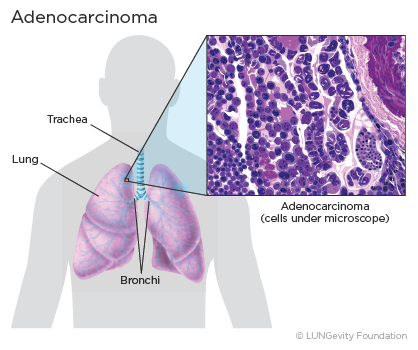 Types of lung adenocarcinoma based on biomarkers

Researchers have made great progress in identifying and understanding “driver mutations” in NSCLC adenocarcinoma, which has resulted in a number of targeted therapies, a very precise type of cancer treatment that identifies and attacks specific parts of cancer cells and the signals that proteins send to cancer cells that cause them to grow and divide uncontrollably.

You can find out more about approved treatment options for each mutation here.

How is lung adenocarcinoma diagnosed?

Different tests are used to diagnose lung cancer and determine whether it has spread to other parts of the body. Some of these tests can also help to decide which treatments might work best. Steps and tests used in diagnosing lung adenocarcinoma include:

The diagnostic approaches used for an individual will depend on medical history and condition, symptoms, location of the nodule(s), and other test results.

For more information about the different steps and tests for making a lung cancer diagnosis, see the Diagnosing Lung Cancer section.

Staging is a way of describing where the cancer is located, if or where it has spread, and whether it is affecting other parts of the body. Doctors use diagnostic tests to determine the cancer’s stage, so staging may not be complete until all of the tests are finished. Knowing the stage helps the doctor to recommend a treatment plan. Lung cancer is treatable at all stages.

The staging system used for lung adenocarcinoma is the TNM system, where the combination of the values assigned to a patient's cancer on three measures—T (tumor), N (node), and M (metastasis)—determine the cancer's stage.Stages range from 0 to IV. The higher the stage number, the more advanced the cancer. Only stage IV is metastatic.6,7

The Lung Cancer Staging section provides more information about how stages are determined and the characteristics of each stage.

Biomarkers are features of a cancer that predict how it will respond to certain treatments. They are helpful in the determination of the most appropriate treatment for the cancer.

Biomarkers currently used in determining treatments for lung adenocarcinoma are: 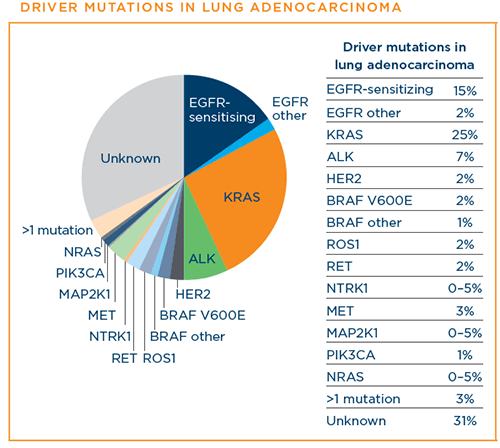 The presence of a certain level of PD-L1, a protein biomarker, is used under certain conditions to determine whether a lung adenocarcinoma patient is likely to benefit from treatment with an immuotherapy drug.19

Tumor mutational burden (TMB) is the total number of mutations that result in changes in the cancer cells’ protein. TMB is used to determine whether a lung cancer patient is likely to benefit from a specific immunotherapy treatment.21,22,23

There are a number of treatment options for lung adenocarcinoma. Which ones are used to treat a specific patient's lung cancer will depend on the stage of the cancer, the patient's overall health, including how well the organs of the patient's body are functioning, and the patient's preferences. A patient's age alone does not predict whether a patient will benefit from a treatment.5,7

Patients may be as involved in the treatment plan decision as they want to be. Patients should discuss all of the options, understand what the goal of each option is (for example, cure vs. control), consider the benefits and risks of each, check about likely side effects, understand how everyday life might be affected, find out what the treatment will mean financially, and not hesitate to get a second opinion if there are unaddressed concerns.17,18

It is always a good idea for a patient to take someone along to appointments to help with questions and take notes.

What are currently approved treatment options?

In addition, new treatments are being studied for lung adenocarcinoma. These are available through clinical trials.

For more information about approved treatment options for NSCLC by stage, see the Treatment Options for Non-Small Cell Lung Cancer by Stage section.

Surgery is a treatment option in lung cancer only when the patient is healthy enough for surgery, and the tumor:

Surgery is the best chance for a cure. Among the types of surgery—lobectomy, wedge resection, segmentectony, pneumonectomy, and sleeve resection—lobectomy, the removal of an entire lobe, is currently considered to be the most effective.10,20

Read more about different surgical options, when they are used, and what to expect after surgery in the Treatment Options: Surgery section.

Radiation therapy is a type of cancer treatment that uses high-powered energy waves to kill cancer cells or reduce the size of tumors. It works by damaging the cancer cells' ability to multiply. Radiation only kills cancer cells directly in the path of the radiation.2,20

The type of radiation therapy most often used to treat non-small cell lung cancer, including lung adenocarcinoma, is external beam radiation therapy (EBRT), which is radiation directed at the lung cancer from outside the body. There are different types of EBRT that can be used, depending on the patient's situation.20

For more information about radiation treatment, including how it works, how and when it is given, the different kinds, and common side effects, see the Treatment Options: Radiation Therapy section.

Patients whose lung cancer has spread beyond the lung to local lymph nodes are often given chemotherapy and radiation therapy. As with other types of non-small cell lung cancer, patients with lung adenocarcinoma are often given two chemotherapy agents as first-line therapy. Which drugs are chosen will depend in part on the patient’s overall health and ability to tolerate different possible side effects. For patients with lung adenocarcinoma, most often one of the platinum drugs cisplatin or carboplatin is combined with another chemotherapy drug, such as pemetrexed or doctataxel.10

For more information about chemotherapy, including how it works, how and when it is given, and possible side effects and how to manage them, see the Treatment Options: Chemotherapy section.

Targeted therapies are a type of therapy that targets cancer cells directly, rather than attacking all rapidly growing cells as chemotherapy does. Targeted therapies focus on specific parts of cells and the signals that cause cancer cells to grow uncontrollably and thrive.11 Most of the targeted therapies that have been studied and approved by the US Food and Drug Administration (FDA) belong to a class of drugs called kinase inhibitors.

As discussed earlier, there are a number of known driver mutations in lung adenocarcinoma. Targeted therapies are currently FDA-approved for patients with metastatic lung adenocarcinoma for eight of them: the anaplastic lymphoma kinase (ALK)A gene that the body normally produces but, when it fuses with another gene produces an abnormal protein that leads to cancer cell growth gene rearrangement, the epidermal growth factor receptor (EGFR)The protein found on the surface of some cells and to which epidermal growth factor binds, causing the cells to divide mutation, the ROS1 gene rearrangement, the BRAF V600E mutation, the NTRK1 gene fusion, the mutation that leads to MET exon 14 skipping, the RET fusion, and the KRAS G12C mutation.

The biggest challenge of tyrosine kinase inhibitors (TKIs), which most targeted therapies are, is that patients with lung adenocarcinoma who initially benefit from them eventually develop resistance, known as acquired resistanceDisease progression after initial benefit with a targeted therapy. Doctors and researchers are working to overcome resistance and to keep TKIs effective for longer periods of time.12

For more information about targeted therapies, including how they work, how and when they are given, possible side effects and how to manage them, and acquired resistance, see the Treatment Options: Targeted Therapy section.

Angiogenesis inhibitors help stop or slow the growth or spread of tumors by stopping them from making new blood vessels. The tumors then die or stop growing because they cannot get the oxygen and nutrients they need. The way they do this is by blocking the cancer cells’ vascular endothelial growth factor (VEGF)A protein made by cells that stimulates new blood vessel formation receptor.13

For more information about angiogeneis inhibitors, how they work, how and when they are given, and possible side effects and how to manage them, go to the Treatment Options: Angiogenesis Inhibitors section.

For more information about immunotherapy, including how the immune system works, possible side effects, other kinds of immunotherapy being studied, and questions to ask your healthcare team, see the Treatment Options: Immunotherapy section.

Clinical trials are research studies among patients to find out whether new medical approaches that are being developed are safe and effective and better than those currently being used.

In addition to the approved treatments described above, there is a great deal of promising research going on now in clinical trials focused on people with lung adenocarcinoma, including targeted therapies, immunotherapy. and new approaches in chemotherapy and radiation therapy.16 Clinical trials are an important option for patients thinking about lung adenocarcinoma treatments.

Patients considering participating in a clinical trial should start by asking their healthcare team whether there is one that might be a good match for them in their geographic area.

For more information about clinical trials and resources for finding one, see the Clinical Trials section.

Managing symptoms and side effects

In addition to the side effects of lung cancer treatment, lung cancer itself can result in a number of symptoms. For more information about the symptoms of lung cancer, see the Signs & Symptoms section.

Tips for managing specific symptoms and side effects related to treatment can be found in the For Supporters & Advocates section of the website, along with other practical and supportive resources for patients/survivors and caregivers.

To help reduce the severity and duration of most side effects and alleviate the cancer’s symptoms, a patient may want to request palliative care, also called “supportive care” or “symptom management.” There is sometimes confusion about the difference between palliative care and hospice care. Hospice care is a form of palliative care given only to patients whose life expectancy is six months or less. On the other hand, palliative care in general is an extra layer of support that can be initiated alongside other standard medical care. In fact, scientific evidence is starting to emerge that shows that palliative care may actually help patients live longer.

For more information about how palliative care can improve quality of life from the time of diagnosis, see the Palliative Care section.

There are a number of doctors and other medical professionals who diagnose and treat people with lung cancer. Together, they make up the comprehensive medical or healthcare team that a patient sees over the course of their care. Members of the healthcare team work together to provide care for a patient, including diagnosis, treatment, and side-effect management and other support services.

For more information about what each member of a healthcare team does, see the Your Medical Team section.

Your experiences can help shape the future of lung cancer.