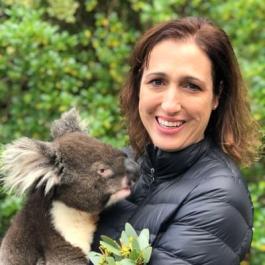 Living with stage IV lung cancer is nothing new for Laura Greco, who is also a lawyer, wife of a professor of history, mother to two wonderful children, and a lung cancer advocate. A CT scan after a car accident in 2015 revealed that Laura had stage IIIA non-small cell lung cancer.  In 2016 an MRI revealed that her cancer had spread to her brain, and she was restaged as Stage IV. Yet her cancer has not stopped Laura from living her life to the fullest. In August 2019, she spent 20 days traveling in Australia with her family; the following month, Laura received a STARS (Supportive Training for Advocates on Research and Training) Award from IASLC and attended the World Conference on Lung Cancer in Barcelona.

A pain and headache that started toward the end of Laura’s Barcelona trip did not go away. At that time, doctors told her there was nothing much to worry about, other than possible radiation necrosis. However, her pain continued throughout the months of September and October, and high doses of steroids and narcotics did not bring much pain relief. The pain became so severe, she ended up in the ER one afternoon on Halloween. Unfortunately, the local doctors at her hospital failed to identify that Laura had developed hydrocephalus, which, left untreated, would kill her.  She was instead released from the hospital and provided minor pain relievers.  A few short days later, she could barely walk, and her husband called the ambulance, which transported her to a larger hospital.  Here the unexpected happened: Laura was whisked in for care, but her husband was unable to go in with her to share her medical history because the ED (Emergency Department) went into lockdown. The ED doctors were completely unaware that Laura had lung cancer or of anything else about her medical situation, which led to several ER mishaps, including an overdose of opioids.  After many hours in the ED, and after Laura continued to deteriorate, she was finally diagnosed with hydrocephalus that was within 45 minutes of requiring intubation and a ventilator.  She was given an External Ventrical Drain (EVD) to remove the brain pressure, and ultimately transferred via ambulance to Massachusetts General, were she underwent a craniotomy.  About a month later, she unfortunately experienced a repeat of some symptoms, which resulted in a craniectomy in mid-December.  She is expected to fully recover.

Laura’s experience with the ER made her think about things she could have done differently to be ready for the unexpected. This is her advice for all lung cancer patients. She calls it her Emergency Preparedness Plan.

1.  Keep a packet handy with critical information, labelled “IMPORTANT MEDICAL INFORMATION ABOUT ME.” Ideally, the packet should be attached to a chain or rope that allows the packet to be on your person in the ER, and family and friends should know where it is in a pinch. The packet should include:

2. Wear a medical alert bracelet, if possible, with the following information: your name, in case of emergency number, any allergies, and that you are a lung cancer patient.  There is a huge variance in the appearance of these bracelets.  Be careful to remember that they must be clearly identified by EMS personnel.

3. Consider having a MOLST (Medical Order for Life-Sustaining Treatments). Note that advance directives and MOLSTs are not the same. MOLSTs are a set of medical orders that define life-sustaining treatment that the patient wishes to receive and not receive now. MOLSTs must be honored by all emergency and other health professionals. MOLSTs are state-specific. Speak with your doctor about preparing a MOLST.

4. Prepare family and friends, and ask in advance for specific help. While your family and friends may know of your lung cancer diagnosis and want to help, they may not know how to step in during times of emergencies. Share with them how you would like them to help out in case emergency situations arise: e.g., come over to watch your kids, take care of your pets… you will be the best person to decide how they can best help you.

As Laura says, “You need to be your own best advocate; I do truly believe that, but I also need to prepare for the unfortunate situation where I cannot physically advocate for myself because I am so ill and a caregiver or someone with knowledge of my history isn't present either. ALWAYS be prepared.”