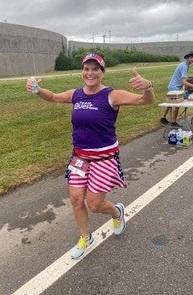 53 days after Julie Jones had video assisted thoracic surgery (VATS) to remove the lower lobe of her right lung, Julie ran a half marathon. Even more impressive, she finished only about 10 minutes slower than her previous half marathon, about three weeks before her lung surgery.

VATS, also known as a thoracoscopy, is a minimally invasive surgery that uses small incision and small instruments to examine and perform operations in the inside of the chest. Anyone diagnosed with stage I, stage II, and sometimes stage IIIA lung cancer might qualify. Julie was diagnosed with stage I adenocarcinoma lung cancer, which is why she qualified for VATS.

Dr. Brendon Stiles, a thoracic surgeon at the Montefiore Medical Center and a professor of cardiovascular and thoracic surgery at Albert Einstein College of Medicine, says that Julie’s accomplishment is great.

“I encourage my patients to get out and walk and vigorously exercise as soon as they can after VATS,” Dr. Stiles explains. “Anything that increases your heart rate and makes you take bigger breaths is great because it aids recovery and will help you feel better faster.”

This could mean running half marathons, like Julie, but it could also be as simple as a fast walk. The point is to choose something that challenges you. “It only counts if you get a little tired,” says Dr. Stiles. “If you feel fatigued and get tired, that’s okay, because that’s what will improve strength.”

Dr. Stiles has other recommendations for those not up for vigorous exercise. “If you can’t run, walk. If you can’t walk, try yoga, chair yoga, or breathing exercises. If you can’t do that, just sit up. Believe it or not, sitting up (instead of laying down) can improve your breathing and help you breathe deeper, which will also help your recovery.”

According to Dr. Stiles, older dogma dictated that patients should refrain from exercise after thoracic surgery; however, that advice was more pertinent to traditional open surgery, during which muscles might be damaged and need more time to recover. Because VATS is a muscle sparing operation, there is less you can hurt by exercising.

There are some exercises Dr. Stiles does not advise. “I tell my patients to take it easy on the lifting and sporting activities. I don’t recommend jumping straight back into tennis or golf for at least the first 6-8 weeks. It’s just not wise to aggravate muscles that might be repairing.”

Exercise after VATS is very individualized, according to Dr. Stiles. He recommends you always talk to your healthcare provider about what exercise you should do and how much.

While exercise after surgery won’t hurt your recovery, there might be additional discomfort, such as rib pain, even when the surgery is minimally invasive like VATS, or numbness in the front of the chest. Those who were active before surgery might notice some new breathlessness, particularly if you had a lobectomy, but your breathing capacity may steadily return to normal a few months after surgery.

Julie returned to exercise the day after surgery. She was still in the hospital, but went on a walk around her hospital floor with a walker. The next day, she went farther, circling her hospital floor 14 times until she hit a mile.

When she was released from the hospital, she started with walking and slowly incorporated running intervals, running about 15 seconds for every 45 seconds of walking. She felt a little more winded than usual, but otherwise felt okay.

The hardest thing for Julie was she couldn’t find any information or guidelines online. Julie is a member of a running Facebook group with over 17,000 runners. She posted a question: has anyone had lung surgery and continued running after? In a group of 17,000 people, only one responded.

One of the biggest mistakes Julie says she made was not listening to her body. She pushed herself too hard at first, running to the point of coughing. Her doctor gave her some recommendations, including to begin taking an inhaler, which really helped. She was used to running through the pain, but she had to learn to be more in tune with her body, because pain could be a sign of something wrong.

Dr. Stiles also agrees you have to listen to your body. “Different people will benefit from different types of exercise and I might offer up different advice, depending on how in shape someone is before surgery. The bottom line: everyone, even the most out of shape, will benefit from exercise after surgery.”

Julie agrees: “I think anyone else going through what I am, even if you don’t run, should get out there and exercise. Physically and mentally, it’s the best thing ever.”

Julie has completed three of the Abbott World Marathon Majors, a series of marathons consisting of six of the largest and more renowned marathons in the world, and plans to run her fourth in Fall 2021. Her goal is to complete the last two: Tokyo and Boston.  Julie says, “I always have another race in front of me. I’m thankful that I can do that. I’m not the same person I was last year, but who is?”

Your healthcare providers may advise you to exercise regularly as part of your recovery. Talk with your doctor about the details of your exercise program.

Julie Jones was never active until she turned 40 and entered her first 5k. After that, she started running more and more, training for half marathons first and then even marathons. At 55 years old, she was diagnosed with stage I adenocarcinoma, which was treated by surgically removing a portion of her lung. Julie is a podiatrist with her own practice and encourages her geriatric patients to walk and exercise. She lives in Knoxville, TN with Erik, her husband of 24 years, and her two sons, Alex and Davis.

Department of Cardiothoracic & Vascular Surgery at Montefiore-Einstein, and the Associate Director for Surgical Services in the Montefiore-Einstein Cancer Center. Dr. Stiles’ clinical focus is on the treatment of lung and esophageal cancer and unusual thoracic cancers including metastatic tumors and those invading the heart. Dr. Stiles is actively involved in both clinical and translational research, particularly focusing on lung cancer. His clinical research concentrates on the management of early stage or screen detected lung cancer and on novel multidisciplinary treatment strategies for patients with lung cancer.

Blog category
From the community
->Survivor stories
From the experts
-> Treatment

Such a motivational article,…

Such a motivational article, what an impact has video assisted thoracic surgery (VATS) provided. Good job Julie, as you mentioned “I always have another race in front of me. I’m thankful that I can do that. I’m not the same person I was last year, but who is?” Wish you many more successful races