The Next Big Thing | LUNGevity Foundation Skip to main content

The Next Big Thing 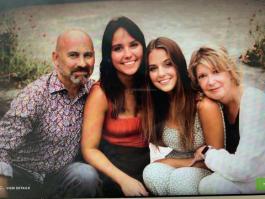 It all started innocently enough with a swollen lymph node above my collar bone. As a family nurse practitioner, I knew this was a bit unusual. When it persisted for a week or so, I thought it time to have it checked out.

A last minute decision by the provider I saw to do a chest x-ray most likely was the first, but certainly not the last time in this journey that my life was saved. That lymph node turned out to be stage IV non-small cell lung cancer.

When I was diagnosed in October 2010, there were few treatment options and the prognosis was grim. I had less than a five percent chance of living five years and would need to undergo brutal chemotherapy and radiation to have any chance at all.

My daughters were 8 and 11 at the time. No one was sure that I’d live to see my oldest graduate from 6th grade and the possibility of seeing them graduate from high school or college was beyond anyone’s imagination. I despaired to think that my girls would grow up without me.

Thankfully, my initial treatment was effective. My cancer responded very well, and I was put on maintenance therapy to keep the cancer at bay. However, after a year, the toxicities of the treatment became too great and we decided to give me a treatment break. I remained stable for about a year and then had my first of several recurrences.

During this time, Dr. Nate Pennell, my oncologist at the Cleveland Clinic who has directed my care along with my local oncologists here in Dayton, Ohio, suggested that I have my tumor tested for driver mutations through a clinical trial they were running. Comprehensive biomarker testing was still quite rare in 2013-14, with most patients only tested for the two leading mutations, if they were tested at all.

After several weeks of waiting, we found that my tumor is driven by the RET fusion gene. RET is an incredibly rare mutation and only occurs in 1-2% of all lung cancers. At the time, the only treatments available that were RET-specific were no better than the treatment I was already taking and, in some cases, the side effects were much worse.

In 2017, my cancer returned again. This time, it showed up in my bowel. The initial thought of my doctors was that we should operate and take out a section of my bowel since it had only recurred in that one spot. However, the operation was not without risk and after further discussion my local oncologist suggested that we make sure there was not a clinical trial that might be available to me.

Luckily, a trial targeting my specific mutation had just opened up in Cleveland. After qualifying for the trial, I became a participant in the Phase l cohort and we began treatment with a new drug that at the time was known only as the company’s name and the number 292.

We were thrilled when I had a complete response to this drug. My tumor responded, and there continues to be no evidence of progression on my scans. The drug moved quickly through all the trial phases and was approved by the FDA in May of 2020.

I just passed the four year mark on the drug now known as selpercatinib and am thankful that it still remains effective at keeping my cancer at bay. I have a few side effects that I deal with but all are managed quite easily by my team of providers and my quality of life is excellent. 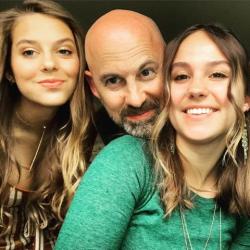 Today, I’m thankful to be feeling good and living a very full and normal life. My girls are thriving. Katie is now 23 and working on her Master’s degree. Elena is soon to be 20 and, after a year of college from home thanks to COVID-19, just started her sophomore year at UCLA. JD and I will soon celebrate our 25th wedding anniversary. I’ve been present for birthdays and school functions and soccer games. I’m now hopeful that I’ll be around for weddings and grandchildren.

I have so many people to thank for this. My incredible team both locally and at the Cleveland Clinic, the researchers who brought this new life saving drug I take to market, and the lung cancer community that I’ve been connected with since the very beginning.

I’m often asked what advice I would give to someone newly diagnosed. First and foremost, get your tumor biomarker tested. Surround yourself with a knowledgeable team that specializes in lung cancer. Find a community you can hook into and feel supported by. Ask for the help you need and never be afraid to advocate for yourself.

I’ve seen the incredible progress made over the last 11 years in lung cancer treatment. There is much to do, but the needle is finally moving in the right direction. I, for one, have never felt more hopeful.

Sara Whitlock is a family nurse practitioner who was diagnosed with Stage lV non-small cell lung cancer. She is a fierce proponent of biomarker testing and advocating for yourself.  She shares her story to raise awareness and provide hope for newly diagnosed patients.  Sara has been involved with lung cancer advocacy since she was diagnosed. She enjoys cooking for friends, walking along the river and binging Netflix shows when she can!

read to Stan who responded, …

read to Stan who responded, “Awesome!” My Neighborhood Bible Study group would say, “God is great!” I can only be thankful for beautiful Sara and her awesome family!

You are one amazing lady and…

You are one amazing lady and I am so proud to know that you have shared your journey and helped so many others. You have encourage your friends by staying strong and positive. Your journey I know has been very hard but yet you still are there for your family and friends. I know God has a plan for your life and I pray you seek his direction daily as he is and has proved to be a loving Savior. Your family is special to me and I love each one of you.