Running a Half-Ironman as a Lung Cancer Survivor 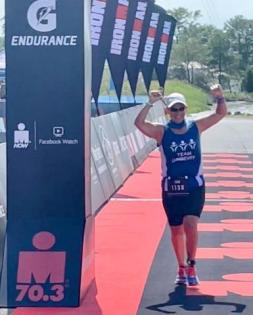 The day before my lung biopsy, May 18, 2020, I ran 7 miles. As I was running, I couldn’t help but think there is no way I have lung cancer. Yet, when the results of my biopsy came back, that’s exactly what I was diagnosed with: stage I adenocarcinoma non-small cell lung cancer.

It’s rare to be diagnosed as stage I; in fact, only about 18% of people are. That’s why I call it my “incidentally-noma,” a little joke as a retired nurse about my lung cancer being found completely by accident.

About a year before I was diagnosed, I had pretty bad food poisoning. I couldn’t stop vomiting and passing out. Nothing was helping, so they did an MRI and found a brain tumor. I had a craniotomy to remove the tumor. Thank God it was a benign meningioma. However, in the process of all that, they also saw a spot on my lung.

My mom was a heavy smoker, and she died from lung cancer at a very early age.  Because of that, and just general stigma around lung cancer, I had the mentality that only people who smoke get lung cancer. I’m athletic and I don’t smoke, so lung cancer was the farthest thing in my mind. Now, I know anyone with lungs can get lung cancer. I’m still a little leery telling other people that my cancer is lung cancer because people can be naïve, but try my best to educate others that lung cancer is not a smoker’s disease.

I’m fortunate they found it as early as they did. Because I was stage I, they were able to treat my cancer through surgery only. They removed my right lower lobe via VATs, along with 34 lymph nodes that all came back negative for cancer.

Prior to my diagnosis, I was very active. I had run the New York City Marathon in 2017 and 2018. After I was diagnosed and found out I would have to remove a part of my lung, I wasn’t sure I would be able to run again; after all, my surgeon was removing 25% of my lung capacity. However, she explained to me that the human body is an amazing machine and that the other two lobes would expand and take up the area where the other lobe was removed. She told me: “You will be able to run again.”

She was right. About a month after surgery, I started to run again. The only reason I waited so long was because the incisions from the surgery made wearing a sports bra too uncomfortable.

Besides the incision sites, which were tender and sore, the only thing that bothered me about running after surgery was the humidity. It made it a little tougher to take deep breathes. My surgeon says this is normal and should improve with time.

Prior to my diagnosis, in 2020, I decided I would do a Half- Ironman in honor of turning 60 years old. A Half-Ironman is a long-distance triathlon consisting of a 1.2 mile swim, followed by a 56 mile bike ride, and a 13.1 mile run. It felt momentous enough for a milestone birthday like 60.

However, the pandemic hit and the event was cancelled and then they found my lung cancer. I wasn’t sure I would still be able to do something like a Half-Ironman, even though my surgeon had assured me I should regain lung capacity. My biggest fear is that I would be too slow as every segment (the swim, the bike, the run) is time capped, and I worried I wouldn’t finish within the allotted time.

My wife gave me great advice. She said, “When you’re out there and have doubts, just look around. Look at where you are, look what you have been able to do. Nothing has stopped you yet.” This was a light bulb moment for me. I realized I’m here, and I’m attempting to do this. If I don’t finish, then I don’t finish, but at least I started.

I finished. In fact, I even felt really good while competing. It did get pretty hot and humid towards the end, and I ran a lot slower than I would’ve if I were just running a half marathon. But I felt so blessed to even be at the event, that when I was coming into the last mile, I got teary eyed.

Now, I am training for the Marine Corps Marathon, which happens every year in October in Washington, DC. I’m aiming to beat my New York City marathon time.

When I was first diagnosed, I didn’t know I was stage I. All I knew was that I had cancer. When you hear “cancer,” you feel as though you’re a ticking time bomb. Once I knew it was stage I, I felt relieved. However, now, I experience some survivors’ guilt.  I’m thankful that I was able to have surgery and live a normal life now, but feel strange sharing my positive news or accomplishments with other survivors who have to go through things a lot worse than what I went through.

I also worry with every repeat scans that it could come back, or some new tumors might pop up. Through this process, I’ve gotten closer to God. I grew up Catholic, but got away from the Church as an adult. Lately, I’ve been reading the Bible and listening to a local Christian radio station. They play a lot of spiritual music, and that has really helped me find peace. Whatever is going to happen, I know it’s in God’s hands now.

If you are newly diagnosed with lung cancer, just know that lung cancer is not a death sentence, whether you are stage I or stage IV. You just have to keep fighting, stay positive, and put your faith in God.

Team LUNGevity, our endurance events program, is gearing up for in-person races this fall, and you’re invited to run with us! 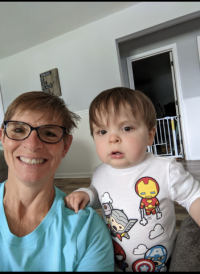 Although very active, Marie did not discover the LOVE for running until she was 50. It was at that time that she committed to running 50 races in a year. He 50th race was her very first half marathon. She hasn't looked back since.

Marie is a retired school nurse who currently lives in Ocean Pines Maryland with her wife and their pets. They have 1 son and a grandson. She treasures her time with her family, especially her grandson. When she's not training for an event, she enjoys the beach, boating & traveling.

Marie shares her story to encourage and inspire others diagnosed with lung cancer to never give up, shoot for the stars, and live life to the fullest.

Blog category
From the community
-> Survivorship
->Survivor stories
-> Get involved