The Stigma of Lung Cancer: A Conversation with Tina Hayden | LUNGevity Foundation Skip to main content

The Stigma of Lung Cancer: A Conversation with Tina Hayden 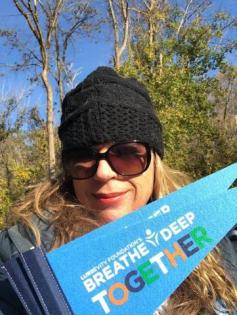 Living with cancer means processing difficult emotions as well as dealing with side effects and physical changes both during treatment and beyond. Living with lung cancer brings an additional challenge of its own.

Lung cancer often comes with a stigma, meaning a lack of respect for a person or group by others. This lack of respect results from society’s belief that lung cancer is caused by smoking alone. This puts the responsibility for the disease on the patients themselves, leading lung cancer survivors to carry an unfair burden of shame and fatalism.

We recognize that survivors who are also former smokers have a particularly difficult relationship with the stigma, even when among others in the lung cancer community. Here we talk with Tina Hayden, lung cancer advocate and LUNGevity LifeLine mentor, to learn about her experience as a former smoker living with lung cancer.

How were you first diagnosed with lung cancer?

I went into the hospital on Christmas Day, 2017, thinking that I had pneumonia. They kept me overnight because of my white blood cell count. I spent the next ten days in the hospital. In the end, I had CT scans and a bronchoscopy, and the doctors told me that it was lung cancer. I immediately thought, “what do we do,” “where do I go,” “is this really what it is?” Initially, they thought it was small cell lung cancer, which is mostly seen in people who smoke. I believe they assumed that because I was a former smoker. I had smoked until I was admitted to the hospital. However, it came back that it was non-small cell, stage IIIA adenocarcinoma.

An oncologist and surgeon were brought in to see if I would be eligible for surgery. They decided on a treatment plan of chemo and radiation, followed by surgery in 12 weeks. I was released from the hospital but then ran into problems with the oncologist they referred me to. I didn’t feel like he really understood me or my needs. At this point, I was fortunate to find Dr. Benjamin Levy at Johns Hopkins.

After going through the chemo and radiation, Dr. Levy put me on immunotherapy. The team at John Hopkins had actually determined that surgery was not an option for me. I really did want surgery. In my mind I thought the only way I would be cured was by having the cancerous tumors removed. But in the end, Dr. Levy was right about the course of treatment. I did four cycles of chemo, radiation, and a year of immunotherapy. I finished all my treatment in April of 2019, and I have had clear scans ever since.

Emotionally speaking, how did you handle the experience?

Treatment-wise I did great. I’m your textbook, perfect candidate. I also haven’t picked up a cigarette since the day I went into the hospital, which is still hard five years later. Emotion-wise, though, it has been really challenging.

The hardest thing is to tell your children you have lung cancer. They had wanted me to stop smoking for several years. It’s very difficult to live with that guilt and feel like a failure as a mother. I feel that I failed them because I wasn’t strong enough to conquer an addiction that now might kill me.

My children had to go through their mom having lung cancer, and instead of hearing, “oh, that’s so sad,” “how can we help you,” or “how’s your mom doing,” they had to defend my smoking. The first question people ask when they hear I had lung cancer is always, “did your mom smoke?” That breaks my heart. Yet, I don’t blame people; they’re curious, and there is a stigma around both smoking and lung cancer. Society is not informed about the causes of lung cancer, and the smoking question is an automatic response.

Still, knowing the burden that I put on my children, with them having to answer to the stigma, is especially hard.

What has the stigma been like as a former smoker with lung cancer?

People like to call lung cancer the un-empathetic cancer. It’s so judged, especially as a former smoker. Everyone asked me how I was doing in treatment. However, nobody ever asked me how I was handling quitting smoking. Quitting was a huge accomplishment; the one thing I used before to help with stress was smoking. Now I can’t use that vice because I have lung cancer. We know that smoking is an addiction, just like alcohol or opioids. It’s a major thing to overcome.

We put programs in place for other addictions. These programs examine mental health and depression and help people understand why they used. However, we don’t do this for smokers, even though it’s such a common addiction. Instead, we put them in a corner; we turn our nose up at them. There’s no care and compassion; there’s only blame and shame.

Is there a stigma toward smokers within the lung cancer community?

I didn’t realize the stigma within the lung cancer community until the pandemic. It’s one thing to go to a conference where the conversations are isolated, but when the meetups started happening online, I noticed it. There is a bit of a nonsmokers vs. former smokers dynamic in our community, which adds to the guilt, shame, and embarrassment. One word can turn someone away, or one phrase and that phrase is “I never smoked.”

When introducing myself in a meetup or online, I never say, “Hi, my name is Tina, and I’m a former smoker.” Yet the majority of nonsmokers introduce themselves as “Hi, I’m ___ and I’m a nonsmoker.” There have been times when I’ve heard, “I took care of myself. I didn’t smoke.” I cringe every time I hear words like that. Sometimes I have to get off the phone or the computer. If they did everything right, then what did I do? Did I do everything wrong? Am I more deserving of lung cancer?

I understand that smoking has been stigmatized so severely in our society that nonsmokers want to separate themselves. Still, they’re further isolating people who did smoke within the group. That’s not supportive. There are times within the group that we have a lot of people pass away or become very sick. They’re telling their story, and everyone feels survivor guilt, but I do not want to share that I’ve had a good scan, especially as a former smoker. How am I supposed to share that I am doing well when others who didn’t smoke aren’t?

Still, I need the same support to continue making a difference as an advocate. That’s where I feel like there’s a block, and it’s so hard. Former smokers do not want to be isolated further by being a separate group.

How have you dealt with the stigma of being a former smoker with lung cancer?

I went into a phase of defending that my cancer was not caused by smoking and making excuses. It got to the point where I started saying, “We don’t know if the smoking caused the cancer. My biological father died of small cell lung cancer when he was 44.” I also began rationalizing to my kids that when you look at my diagnosis, non-small cell, stage IIIA adenocarcinoma, I have the form of lung cancer often seen in younger women without a history of smoking.

I didn’t want to feel any worse when I already felt bad enough. I got to the point where I decided not to talk about smoking at all, but it’s not right to hide my story of being a former smoker.

Still, I struggle with how to “own it.” So, I go back and forth. Sometimes I’m very open in the meetups, and sometimes I’m not, but I have to tell you when people ask me, “did you smoke?” I still get tongue-tied and it makes me anxious.

Have you found a community with other former smokers?

I was in the LUNGevity meetups for a year and a half before I really knew who was a former smoker. I wasn’t in every group or joining every week, but it took a long time before I knew of others and learned that they had similar emotions to mine.

There’s a no-mutation group, and often if you don’t have mutations, it means that you might be a former smoker. There were only five people in the meetup when I joined. I decided to bring up the elephant in the room. I said, “If the no-mutation group is for former smokers, why aren’t more people on this call?” No one knew why. I think it’s because we’re embarrassed. We’re embarrassed about smoking because we’ve been shamed for so long. We feel guilt, and we don’t feel like we are as deserving. How do we make former smokers feel like there is a place for them? Where they do not feel like they are judged. Nobody on the calls introduces themselves as former smokers but recovering alcoholics share how many weeks, months, or years they have gone without drinking and are proud. We are not proud, or we are proud but don’t feel free to express it.

What do you wish others knew?

I wish people in general wouldn’t judge that I am a former smoker. Former smokers overcame addiction, and I am proud that I could do that. Still, it’s a slap in the face every time I’m asked about smoking.

Being proud that I am not a smoker now doesn’t change the guilt and the shame that I carry with me for myself, my kids, and other survivors. If you only knew the level of hurt and shame that we carry. Every time we’re questioned about smoking, it brings it all up again­—and the survivor’s guilt when we experience loss in our community is especially hard. Especially because I have kids—I hate what it has done to them. They’re supportive, proud, and look beyond it, but it’s with me all the time. It’s a part of me, of who I am, where I was, and why I am here now in this situation.

I wish there was more compassion, understanding, and curiosity. And to those who are recently diagnosed, I hope that you don’t let the stress or the stigma get to you. Know that you will get questions about smoking, but you are not alone. I wish I had been more prepared when I was newly diagnosed. I needed to be told not to take it personally. People are not making assumptions about smoking to be mean to you; they’re saying it because they don’t know and want answers. People are curious, so they ask questions.

LUNGevity’s survivorship staff is always available to offer one-on-one support or answer questions by email at hope@lungevity.org. Learn more about LUNGevity’s virtual meetups, including the no-mutation group, and view the calendar to see upcoming meetups and events. Emotional support resources addressing topics like stigma and mental health can also be found on our website.