Your Best Advocate is You

Web MD and I would not get along. According to them, my smoking history and family history meant there was a less than 10% chance of me getting lung cancer. Despite that, as a healthy, active 58 year old, I was diagnosed with stage 2B, non-small cell lung cancer in June 2019.

Like most people with lung cancer, my journey to diagnosis and treatment was not a straight line. I had no symptoms you would expect, like a cough. I did have some discomfort in my chest, and I had several appointments with doctors and even an EKG to try to figure out what was causing it, but never had a CT scan or a chest x-ray. In the back of my mind, though, I was thinking about my family history of lung cancer and beginning to wonder.

When I had my annual check-up with my primary care physician, I told her about the chest discomfort. I was the one who asked if I could get a chest x-ray done. Right after my x-ray, my doctor called me immediately and said, “You need to come back in.” And I knew there was something very wrong.

Both my grandma and great aunt died from lung cancer. I always include this information in my family history when I fill out forms for doctors. Despite this, it was never addressed by either the doctors I saw about the chest pain or my PCP. My experience with lung cancer has taught me that you can’t just assume your PCP is in tune with you. Sometimes, I wonder what would have happened if I had spoken up earlier. Would they have found my cancer sooner?

I went to see a local thoracic surgeon, who suggested a pneumonectomy. We were living in Florida at the time, so I also went to Moffitt Cancer Center for a second opinion. They told me that standard of care would actually be a lobectomy. However, they couldn’t fit me into the schedule to perform the procedure for several months.

This is how panic can influence the care you received. When I was diagnosed, it was like the floor fell out from under me. The fear is overwhelming. When you turn to Google, there is very little promise or hope, just bad prognoses of 3-6 months to live.  You think that you need to do something about this right away or it will be too late.

When I found out that the local surgeon could do the procedure in just a few short weeks, I said yes. All I wanted was for the tumor to be out of me. What I learned later is that the surgeon didn’t even do the pneumonectomy I thought I was getting, but a wedge resection. Since then, every doctor I’ve seen has asked why he did a wedge resection when standard of care would be a lobectomy. Even oncologists and radiation oncologists have asked.

This is when doubt about the quality of care I was receiving began. In hindsight, I don’t know that the local thoracic surgeon who performed my wedge resection was as experienced in lung surgeries as he was in heart surgeries. He was a caring and compassionate man, and I appreciate the empathy, but empathy can’t stop cancer from growing and spreading.

During the surgery, they found two nodes outside the lung with solid tumors, and I was restaged to 3A. I did 4 cycles of chemo, which I handled pretty well. I was even able to pack up my entire house during my third and fourth cycles of treatment when we decided to move back to Iowa to be closer to family.

Once back in Iowa, I received 6 weeks of radiation. I also started immunotherapy, which had manageable side effects that allowed me to stay active. Unfortunately, I had a recurrence in my lung and had to stop the treatment. As part of preparation for surgery, they did a brain MRI and found a brain lesion.

Now, I am preparing for radiation to the brain and another surgery to address my recurrence. I have decided to continue my care at the University of Iowa Comprehensive Cancer Center. While I appreciate the compassion I received from the local doctors, I have had enough negative experiences, like my radiation oncologist taking phone calls in the middle of my appointment, that have confirmed this is the right decision for me. I believe the treatment at the Cancer Center will be more innovative and collaborative and will allow me access to clinical trials down the line. For me, this is how I will have access to best quality care.

A lung cancer diagnosis is a rollercoaster. We don’t have much control over what happens on that ride, but I can control what I can do for myself. I can stay active, I can advocate for my own health, and I can ensure that I have the right people on my team to ensure my treatment keeps moving forward. I can’t control where the ride will take me next, but I can give the cart a push so I don’t stay in the dark tunnel too long.

Through my journey with lung cancer, I have embraced my outspokenness. My words aren’t always right, but I have a strong sense of passion and urgency when advocating on behalf of myself. I have learned that we as patients need to be as open and as assertive as possible to ensure the best care possible. I am my own best advocate, and I need to fight for myself.

I will continue to advocate for myself, by pushing my healthcare team to find the optimal care for me, and for others like me, by spreading awareness of the reality of lung cancer to remove stigma and build a community of people interested in helping and working with those affected by lung cancer.

None of us are going to get out of life alive, but I'm going to do everything in my power to make it a nice, ripe old age. 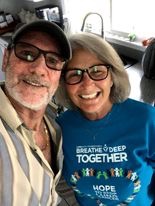 Lyn Smith has been married to the man of her dreams for 33 years this year. She is the mother of 4 amazingly beautiful daughters and about to have her 8th grandchild - a grandson. She was blessed to be a stay-at-home mom until her kids were older, at which point she worked for the school district they lived in for 15 years. She drove a school bus and was a para educator for the handicap.

Lyn is still actively involved in Boxer dog rescue in her state; boxers are her family’s soul dog. They have fostered many, adopted (foster failed), and shared in the passion of finding forever homes for this amazing breed.

Retiring younger than most, she and her husband built our own business in lawn care. They ran their business successfully for another 15 years.  It allowed them winter escapes to the south, with many years in southern Texas on the coast.  Prior to Lyn’s diagnoses, they had just made the BIG move to the east side of southern Florida for what they planned to be real retirement.  They moved back north at the end of her chemo to be close to family.  They hope to soon be able to resume their southern travels in the winter.