Tissue biopsies are tests in which small amounts of tissue are removed for examination to find out if a person has lung cancer and, if so, which type of lung cancer.

Currently, tissue biopsies are the only way to confirm a diagnosis of lung cancer.

(Liquid biopsies, a test done on a sample of blood, are used in other situations. Read more about them in the Biomarker Testing section.)

There are many different ways doctors can obtain tissue. Depending on which method is used, the doctor can also determine whether the cancer has spread to lymph nodes or other organs. The tissue that is removed is sent to a pathologist, who examines it and then issues a pathology reportThe description of cells and tissues made by a pathologist based on what is seen under a microscope with his or her findings.

Having enough tissue available for biomarker (mutation, genomic, or molecular) testingAnalyzing DNA to look for a genetic alteration that may indicate an increased risk for developing a specific disease or disorder can also be an important consideration. Before a biopsy is done, the patient should speak with his or her doctor about having the tumor sample profiled. Read more about this in the Biomarker Testing section. 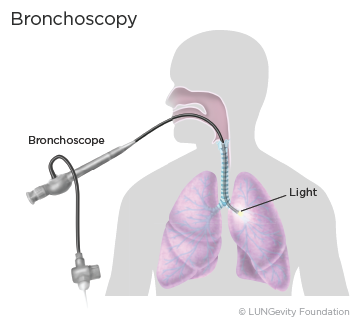 During a bronchoscopy, a surgeon or pulmonologista doctor who specializes in lung disease inserts a bronchoscope (a thin, flexible tube) into the patient’s mouth or nose, down the tracheaThe airway that leads from the larynx (voice box) to the bronchi (large airways that lead to the lungs). Also called windpipe, and into the lungs. A light and a camera at the end of the tube allow the doctor to look for abnormal areas. Tiny tools can be passed down through the bronchoscope to take samples of tissue, which are checked under a microscope for signs of cancer.1,2,3

Prior to a bronchoscopy, a numbing medicine is sprayed in the mouth and throat. Sometimes a patient may also be given sedationA state of calmness, relaxation, or sleepiness caused by certain drugs through an intravenous (IV)Into or within a vein line to prevent pain or to help the patient relax.1,2,3

Endobronchial ultrasound-guided transbronchial needle aspiration (EBUS-TBNA) may be used to access mediastinal lymph nodes. A flexible bronchoscope fitted with an ultrasound device is guided down the trachea. Once the bronchoscope is in place, a needle is inserted through the bronchus and into a lymph node to obtain a sample. EBUS-TBNA requires local anesthesia.4,5

If a suspicious mass is in the peripheryThe outermost part or region of the lungs, a needle can be passed though the chest wall with CT or ultrasoundA procedure that uses high-energy sound waves to look at tissues and organs inside the body guidance to biopsy tissue or remove suspicious fluid. When a small needle is inserted through the skin of the chest wall, it is called a fine needle aspiration (FNA)The removal of tissue or fluid with a thin needle for examination under a microscope, usually to determine if cancer is present or what the cancer cell type is. If a larger sample is needed, a core biopsyThe removal of a tissue sample with a wide needle for examination under a microscope is done with a larger needle.1,6

For a transthoracic needle biopsy, an interventional radiologistA medical doctor who is specially trained to use minimally invasive image-guided procedures to diagnose and treat diseases, with the goal of minimizing risk to the patient and improving health outcomes inserts a needle through the chest wall. A chest CT scan or a special X-ray machine called a fluoroscopeAn instrument equipped with a fluorescent screen on which the internal structures of the human body may be continuously viewed by means of X-ray is used to help the doctor guide the needle toward the suspicious area. A sample of the mass is then aspirated, or sucked out, and sent to the lab to check for cancer cells.1,6

Advantages of this type of biopsy are that it requires only a very small nick on the skin, and usually local numbing medicine is all a patient needs. Disadvantages of a transthoracic needle biopsy are that sometimes it can miss small nodules or might not provide enough of a sample to make a diagnosis and perform biomarker testingAnalyzing DNA to look for a genetic alteration that may indicate an increased risk for developing a specific disease or disorder. Note: A core biopsy is usually preferred for biomarker testing.6,7,8 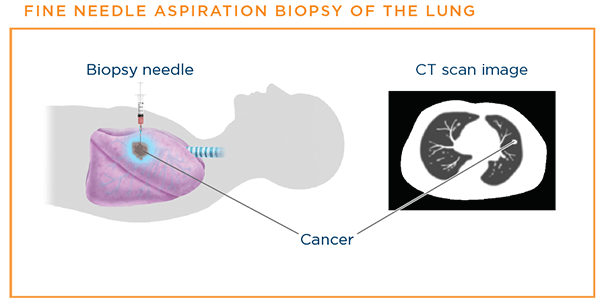 If a patient has a pleural effusionfluid around the lungs, doctors can perform a thoracentesis to see if it was caused by cancer that spread to the linings of the lungs. In this procedure, a doctor numbs the skin and then inserts a hollow needle between the ribs to drain the fluid. The fluid is sent to a laboratory to be checked for cancer cells.1,9 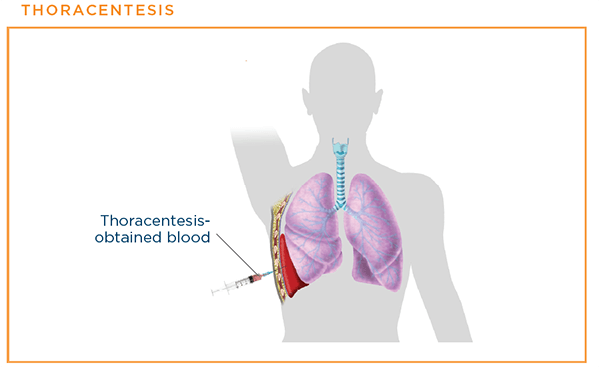 A thoracoscopy is a surgical procedure performed in the operating room under general anesthesia. A surgeon makes a small incision in the skin of the chest wall and inserts a special instrument with a small video camera on the end to examine the lungs and inside of the chest. Samples of tissue are removed for a pathologist to look at under the microscope. This procedure is also referred to as VATS (video-assisted thoracoscopic surgery).

A thoracoscopy can be used for multiple reasons:

Because it is more invasive and requires general anesthesia, a thoracoscopy is not usually the first procedure done to get tissue to diagnose lung cancer if a less invasive procedure can be done. It is sometimes used for diagnosis if tests such as transthoracic needle biopsies are unsuccessful in getting enough tissue for the diagnosis. However, a thoracoscopy is performed more often during the treatment of lung cancer.1,10

Mediastinoscopy is performed to get tissue from the mediastinumarea between the lungs. A surgeon makes a small incision in the front of the neck at the top of the breastbone. Then a thin, hollow tube with a light and a lens for viewing is inserted through the incision, along the front edge of the windpipe. Instruments are passed through the tube to take samples from the lymph nodes along the tracheaThe airway that leads from the larynx (voice box) to the bronchi (large airways that lead to the lungs); also called "windpipe". The samples are sent to a laboratory to check for cancer cells. A mediastinoscopy requires general anesthesia and is performed in an operating room.  A similar procedure, mediastinotomy, also gets tissue from the area between the lungs. This procedure makes an incision, a little larger than that in a mediastinoscopy, near the breast bone and between the left second and third ribs in order to reach lymph nodes unreachable by mediastinoscopy.1,10,11