To help you understand and share this information, you can request our free booklet that summarizes the detailed information in the following sections.

SCLC derives its name from the way the cancer cells look under a microscope; they are round, oval, or spindle-shaped and smaller than both normal, healthy cells and the cells of the different types of NSCLC. SCLC is sometimes also called small cell carcinoma or oat cell cancer.3 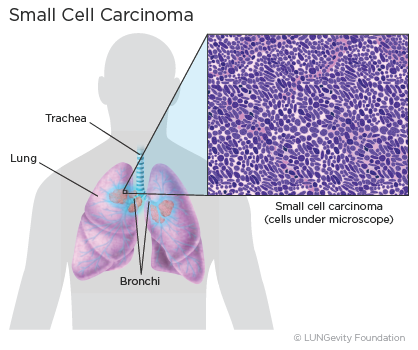 SCLC usually begins in the bronchiThe large air passages that lead from the trachea (windpipe) to the lungs, the major airways in the center of the chest that lead to the lungs, although about 5% of the time it is found in the periphery of the lungs. SCLC is a type of neuroendocrine tumor. It is a very aggressive cancer that grows and spreads rapidly.1,2,

SCLC accounts for about 15% of all lung cancers, and is found most often in people with a smoking history.1,4

Different tests are used to diagnose lung cancer and determine whether it has spread to other parts of the body. Some of these tests can also help to decide which treatments might work best. Steps and tests used in diagnosing SCLC may include:

The diagnostic approaches used for an individual will depend on medical history and condition, symptoms, location of the nodule(s), and other laboratory test results.

For more information about the different steps and tests for making a lung cancer diagnosis, see the Diagnosing Lung Cancer section.

Staging is a way of describing where the cancer is located, if or where it has spread, and whether it is affecting other parts of the body. Doctors use diagnostics to determine the cancer’s stage, so staging may not be complete until all of the tests are finished. Knowing the stage helps the healthcare team:

SCLC is treatable at any stage.

Staging of SCLC is described in two different ways:

For more information about how stages are determined and the chararacterisics of each stage,see the Lung Cancer Staging section.

At this time, biomarker testing is not recommended in general for SCLC patients; however, a patient's  healthcare team may recommend biomarker testing if the patient is considering participating in a clinical trial for a drug that targets a small cell driver mutation.

There are a number of treatment options for SCLC. Which ones are used to treat a specific patient’s lung cancer will depend on the stage of the cancer, the patient’s overall health, including how well the organs of the patient's body are functioning, and the patient's preferences. (A patient's age alone does not predict whether a patient will benefit from treatment.)3,5

Patients may be as involved in the treatment plan decision as they want to be. Patients should discuss all of the options, understand what the goal of each option is (for example, cure vs. control), consider the benefits and risks of each, check about likely side effects, understand how everyday life might be affected, find out what the treatment will mean financially, and not hesitate to get a second opinon if there are unaddressed concerns.13,14

It is always a good idea for a patient to take someone along to appointments to help with questions and take notes.

What are currently approved treatment options?

Approved treatment options for SCLC include:

In addition, several new types of treatment are being studied for SCLC. These are available through clinical trials.

Surgery is a treatment option for only a small percentage of limited-stage SCLC patients. It appears to be effective only among the less than 5% of patients whose limited-stage cancer is also stages 1-IIA cancer, in which the tumors are small (no larger than 5 cm across) and have not spread to lymph nodes.3

If surgery is performed, lobectomy, in which the lobe of the lung where the tumor is located is removed, is the preferred type of surgery.3

The surgery is followed up with adjuvant chemotherapy or a combination of chemotherapy and radiation therapy.3

Read more about different surgical options, when they are used, and what to expect after surgery in the Treatment Options: Surgery section.

The second way radiation therapy is used is called prophylactic cranial irradiation. For those limited-stage SCLC patients whose cancer has shrunk after treatment, radiation to the brain may be used because it reduces the risk of the cancer spreading there.3,15,16

For those patients whose cancer hs returned, palliative radiation therapy may be used to ease symptoms.3,15,16

For more information about radiation therapy, including how it works, how and when it is given, the different kinds, and common side effects, see the Treatment Options:  Radiation Therapy section.

Chemotherapy is a systemic drug treatment, most often given intravenously to lung cancer patients, that targets and kills the rapidly growing cancer cells by traveling through the blood to reach the cancer cells wherever they are. Chemotherapy is the only treatment that is a component of the treatment plan for all SCLC patients.3,15,17,18

SCLC patients tend to have a good initial reponse to chemotherapy, but the disease inevitably recurs (comes back) because resistance to the treatment develops. When it recurs, a single chemotherapy drug, such as lurbinectedin (ZepzelcaTM) or topotecan (Hycamtin®) may be used.2,3

Thoracic radiation therapy, as discussed earlier, is typically given together with chemotherapy for limited-stage SCLC. If the patient cannot tolerate radiation therapy, combination chemotherapy may be used alone. Some patients with extensive-stage disease may also be considered for thoracic radiation if they have a good response to their initial therapy and if their cancer is primarily active in the lungs and chest.3

For more information about chemotherapy, including how it works, how and when it is given, and possible side effects and how to manage them, see the Treatment Options: Chemotherapy section.

The U.S. Food and Drug Administration (FDA) has approved two immunotherapy drugs for the treatment of patients with metastatic (extensive-stage or stage IV) SCLC under various conditions.

For more information about immunotherapy, including how it works, how and when it is given, and possible side effects and how to manage them, see the Treatment Options: Immunotherapy section.

Clinical trials are research studies among patients to find out whether new medical approaches that are being developed are safe and effective and better than those currently being used.

Patients considering participating in a clinical trial should start by asking their healthcare team whether there is one that might be a good match for them in their geographic area.

For more information about clinical trials and resources for finding one, see the Clinical Trials section.

Managing symptoms and side effects

In addition to the side effects of lung cancer treatments, lung cancer itelf can result in a number of symptoms. For more information about the symptoms of lung cancer, see the Signs & Symptoms section.

Tips for managing specific symptoms and side effects related to treatment can be found in the For Supporters & Advocates section of the website, along with other practical and supportive resources for patients/survivors and caregivers.

To help reduce the severity and duration of most side effects and alleviate the cancer’s symptoms, a patient may want to request palliative care, also called “supportive care” or “symptom management.” There is sometimes confusion about the difference between palliative care and hospice care. Hospice care is a form of palliative care given only to patients whose life expectancy is six months or less. On the other hand, palliative care in general is an extra layer of support that can be initiated alongside other standard medical care. In fact, scientific evidence is starting to emerge that shows that palliative care may actually help patients live longer.

For more information about how palliative care can improve quality of life from the time of diagnosis, see the Palliative Care section.

There are a number of doctors and other medical professionals who diagnose and treat patients with lung cancer. Together, they make up the comprehensive medical or healthcare team that patients see over the course of their care. Members of the healthcare team work together to provide care for a patient, including diagnosis, treatment, and side-effect management and other support services.

For more information about what each member of a healthcare team does, see the Your Medical Team section.