Find out more about how the immune system works, how treatments to boost it can help fight lung cancer, and whether participating in a clinical trial using immunotherapy might be a good option for you.

What is the immune system? 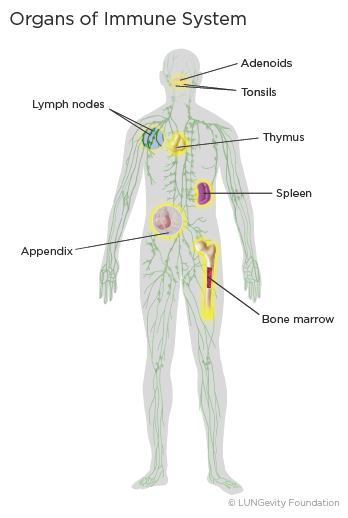 Lymphocytes grow and develop in the bone marrowThe soft, sponge-like tissue in the center of most bones, thymusAn organ in the chest behind the breastbone that is part of the lymphatic system, in which T lymphocytes grow and multiply, and spleenAn organ on the left side of the abdomen near the stomach that makes lymphocytes, filters the blood, stores blood cells, and destroys old blood cells. They can also be found in clumps throughout the body, primarily as lymph nodesA rounded mass of lymphatic tissue surrounded by a capsule of connective tissue. Clumps of lymphoid tissue are also found in the appendix, tonsils, and adenoidsA mass of lymphatic tissue located where the nose blends into the throat. The lymphocytes circulate through the body between the organs and nodes via lymphatic vesselsThin-walled tubular structures that collect and filter lymph fluid before transporting it back to the blood circulation and blood vessels. In this way, the immune system works in a coordinated manner to monitor the body for germs and other abnormal cells.2,3,4,5

How does the immune system work?

A key feature of the immune system is its ability to tell the difference between the body's own normal cells, or "self," and cells and other substances that are foreign to the body, or "non-self." Every cell in the body carries a set of distinctive proteinsMolecules made up of amino acids that are needed for the body to function properly on its surface. These identifying surface proteins let the immune system know that they are cells that belong to the body.5,6 They can be compared to the uniforms a football team wears. In the same way the uniform helps the quarterback know who is on his team, the proteins let the immune system know which cells belong in the body.

If a foreignSomething that comes from outside the body substance—such as a bacteria, virus, or tumorAn abnormal mass of tissue that results when cells divide more than they should or do not die when they should cell—is recognized, the immune system kicks in to try to deal with it. It is the “non-self” antigens on the surface of these cells—the other team’s uniform—that the immune system identifies as abnormal. The immune system is great at recognizing bacteria and virus cells, because they "look" very different from healthy cells. On the other hand, tumor cells started as healthy cells and can look a lot like healthy cells. As a result, the body may have a harder time recognizing tumor cells as foreign.5,6

How does the immune system combat cancer?

The immune system has two responses that work together to detect and destroy cancer cells: innate immune responseImmune response to a pathogen that involves the pre-existing defenses of the body and adaptive immune response. 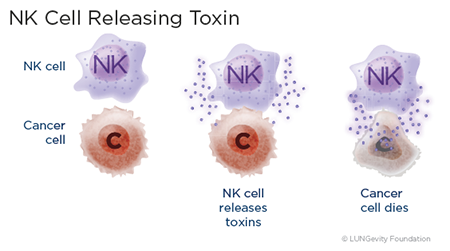 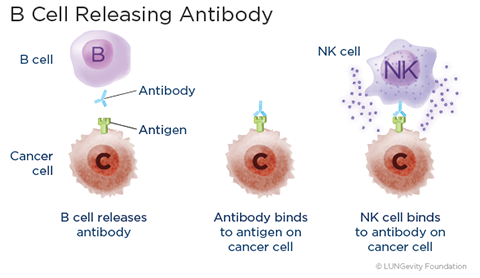 B cells are like the body's military intelligence system, seeking out their targets and sending defenses to lock onto them. They react to “non-self” antigens by making proteins called antibodiesA protein made by B cells in response to an antigen, the purpose of which is to help destroy the antigen. Antibodies are proteins that can attach to foreign and abnormal cells and let the body know that they are dangerous. Antibodies can kill cancer cells in several ways, including binding natural killer (NK) cells to the cancer. B cells can create "memory"—they start to make antibodies quickly when they recognize a past antigen.2,5,6

T cells are the major cells the body uses to recognize and destroy abnormal cells. Once a foreign antigen or abnormal cancer protein has been recognized by T cells, the T cells rapidly increase in number. An army of T cells can be formed; these T cells are specifically designed to attack and kill cells that have foreign antigens.2,5,6 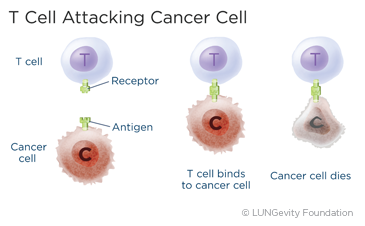 The T cells are like soldiers, destroying the invaders. They are responsible for coordinating the entire immune responseThe activity of the immune system against foreign substances (antigens) and destroying infected cells and cancer cells. T cells can also create memory after an initial response to an antigen. This memory is meant to ensure that the attack on cancer cells can keep going in the long term, for months or longer. The memory also allows for future responses against the specific abnormal antigen on cancer cells, if and when the cancer comes back.2,5,6

If the immune system recognizes the lung tumor cells and can destroy them, why are lung tumors able to grow? Research has shown that some tumors enable their own growth by turning off the immune response. Immune responses beyond what is normal or necessary can be toxic, so T cells have many normal methods to dampen themselves down and essentially turn themselves off. This may allow the growth and development of tumor cells despite the presence of T cells with the potential to kill cancer cells. Researchers are working to understand exactly how this happens and how best to turn the cancer-killing T cells back on.2,5,6

Biological therapies use substances made from living organisms to treat disease. These substances either already exist in nature or are manmade in a laboratory.7

►What is an immune checkpoint pathway?

The PD1/PD-L1 proteins are an example of an immune checkpoint pathway. The PD-1 protein is found on the T cells and acts as the brakes that keep the T cells from attacking healthy cells. PD-L1 is a protein on healthy cells, but it can also be found on cancer cells. When the PD-1 on T cells attaches to the PD-L1 on other cells, the T cells know not to attack those other cells. Cancer cells can thus evade detection by T cells, with the result that the T cells' immune response is lessened at a time when it should be active. This allows cancer cells to thrive.8

How do immune checkpoint inhibitors work?

The immune checkpoint inhibitors work by targeting and blocking the fail-safe mechanisms of the immune system. Their goal is to block the immune system from limiting itself, so that the original anti-cancer response works better.9

What immune checkpoint inhibitors are FDA-approved?

Patients with pre-existing autoimmune conditions should discuss these conditions with their doctors. Those who do go on an immune checkpoint inhibitor should be monitored very carefully for autoimmune side effects.15

How are immune checkpoint inhibitors administered?

FDA-approved immune checkpoint inhibitors are given intravenouslyInto or within a vein. Dosages, infusion time, and schedules vary, depending on the drug.

Patients whose tumors have high levels of PD-L1 expression are more likely to respond to PD-1/PD-L1 therapies. However, even those with tumors that do not express PD-L1 may respond to these treatments.

Not all advanced non-small cell lung cancer patients who are administered immunotherapy respond to it. However, in certain circumstances, the response rate can be high: the response rate to pembrolizumab (Keytruda®) as monotherapy for first-line treatment of tumors with high PD-L1 expression has been shown to be about 40%.16

The response may continue after treatment is stopped. Patients may have long-lasting remission.17

Researchers are studying how to increase the number of people who respond to this treatment. In clinical trialsA type of research study that tests how well new medical approaches work in people, they are combining treatments, boosting the immune system, and using other strategies.

How long does it take to see results from therapy with immune checkpoint inhibitors?

Of those patients in clinical trials with immune checkpoint inhibitors who have responded, most respond within the first six to eight weeks.18

In a very small subset of patients (1%-3%), the tumor on a CT scanA procedure that uses a computer linked to an X-ray machine to make a series of detailed pictures of areas inside the body may seem to get worse at first and then get better, or there may seem to be new areas of tumor. One theory about this is that the tumors get larger because a large number of the patient’s T cells move into the tumor to attack and kill the cancer cells. For the great majority of patients whose scans show worsening of disease after at least a couple of months on immunotherapy, the scans are accurately showing that the immunotherapy is not working.18

In cases like this, the best course of action will likely be based on a number of factors. If the patient’s scan looks worse but the person is feeling fine, the doctor and patient may decide together to do another course of immunotherapy. If the scan looks worse and the person is feeling worse, then it may not make sense to continue with this type of therapy. In this case, the patient may need another kind of therapy to control the symptoms.

Rarer but  more serious side effects, such as pneumonitis and other inflammatory conditions, may also occur.

Some patients experience side effects that are severe enough that they need to stop taking the immunotheapy treatment. In general, based on what has been seen to date, these kinds of treatments are well tolerated by most patients.

What new immune checkpoint inhibitors are currently being tested?

A number of immune checkpoint inhibitor drugs not yet approved for lung cancer are currently being tested, including:19

What is a therapeutic cancer vaccine?

How do therapeutic cancer vaccines work? 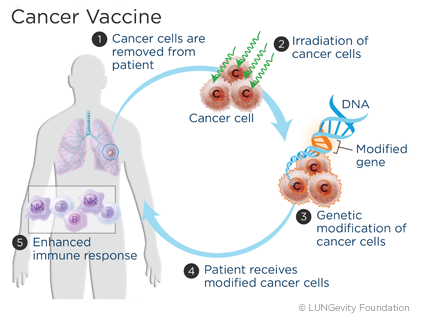 A therapeutic cancer vaccine is made from a patient’s own tumor cells or from substances taken from the tumor cells. They are designed to work by activating the cells of the immune system to recognize and act against the specific antigen on the tumor cell. Because the immune system has special cells for memory, the hope is that the vaccines will also help keep the lung cancer from coming back.20,21,22 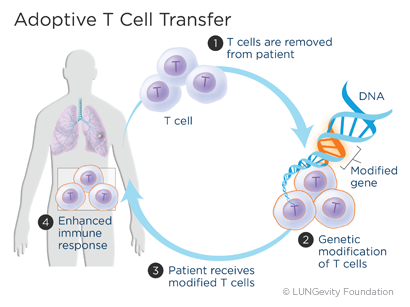 What is adoptive T cell transfer?

In adoptive T cell transfer, a sample of T cells is removed from the patient and then genetically changed in order to make the T cells more active against specific cancer cells. Scientists can change what is on the surface of the T cells. For example, they can add a receptor to the surface of the T cell that will target a specific antigen on a cancer cell. The receptors work like very specific Velcro that allows T cells to stick to cancer cells and kill the cells. The T cells are then returned to the patient, and the altered T cells quickly home in on their targets.23,24,25

Typically during an immune response, T cells multiply. After the initial response, most of the newly made T cells are eliminated. This keeps the total T cell number in the body at a normal level. The normal level of T cells is usually not high enough to sustain a response strong enough to effectively fight cancer.23,24,25

how are t cells removed from and returned to a patient?

The three approaches to performing adoptive T cell transfer are:25

After any of these, the T cells are then returned to the patient through an infusionA method of putting fluids, including drugs, into the bloodstream.23,24,25

Clinical research is ongoing to evaluate the role of immunotherapy approaches, alone or in combination with other treatments.19

If you are considering participating in a clinical trial, start by asking your healthcare team whether there is one for which you might qualify in your area. In addition, here are several resources to help you find one that may be a good match for you: